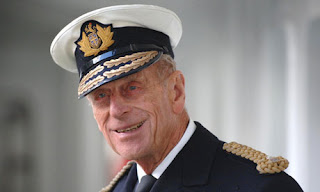 Prince Philip who has been the 'Queen's Consort' since 1947, the year I was born, was 90 years old yesterday.

An article by Tom Utley in 'The Daily Mail' gave a flavour of this man. It was entitled :
I'm not completely besotted but a visit to a Bethnal Green basement won me over to today's royal birthday boy.

It went on to say that for all his apparent blunders, he should be respected and
Tom made the following points about the Duke, that :

* he first saw him at close quarters more than ten years ago, visiting a drug rehabilitation centre run by a charity in the East End of London.

* he was meeting a handful of social workers and a couple of recovering addicts, squashed into two tiny rooms in the basement of a dilapidated shop.

* nothing much newsworthy was likely to come of it, but he,(Tom)had been sent along with my notebook simply on the off-chance that the royal visitor, would make one of his celebrated 'gaffes'.

* like him, they were expecting the cartoon character depicted in the tabloids: arrogant, cantankerous and impatient with political correctness to the borderline of racism.

* where drug addiction was concerned, they imagined that he would belong firmly to the cold showers and ‘pull yerself together, man’ school of rehabilitation.

* he didn't succeed in turning these Left-leaning community workers into flag-waving royalists but he convinced them he was genuinely interested in their work, knew a great deal about treating addiction and about government policy on the matter and was determined to give them all the practical help he could. If it was an act, it was an extremely good one.

* above all, he left them believing their work was important and hugely appreciated.

* aside from his faults he has virtues in abundance : boundless energy, good humour, stoicism, a keen interest in other people and an unfailing sense of duty, which, he (Tom), reckoned, far outweighed his failings.

His gaffes are endearing :

* On Madonna :
After being told that Madonna was singing the Die Another Day theme in 2002:
“Are we going to need ear plugs?”

* To Simon Kelner, republican editor of 'The Independent', at Windsor Castle reception:
“What are you doing here?”
“I was invited, sir.”
“Well, you didn’t have to come.”

* To female sea cadet last year:
“Do you work in a strip club?”

* To expats in Abu Dhabi last year:
“Are you running away from something?”

* After accepting a conservation award in Thailand in 1991:
“Your country is one of the most notorious centres of trading in endangered species.”

* To President of Nigeria, who was in national dress, 2003:
“You look like you’re ready for bed!”

* His description of Beijing, during a visit there in 1986:
“Ghastly.”

* On Tom Jones, 1969:
“It’s difficult to see how it’s possible to become immensely valuable by singing what are the most hideous songs.”

* To Cayman Islanders:
“Aren’t most of you descended from pirates?”