Julie Driscoll, singer and actress, known for her 1960's versions of Bob Dylan's 'This Wheel's on Fire', and Donovan's 'Season of the Witch', which she sang with 'Brian Auger & The Trinity' is 10 days older than me and 64 today.

Things you possible didn't know about Julie, that she :

* as a teen, oversaw 'The Yardbirds Fan Club', where the group's manager encouraged her to begin a performing career of her own. 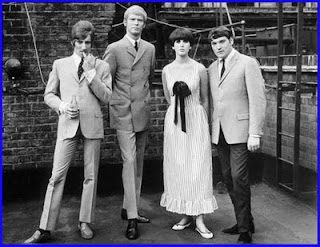 * in 1963, issued her debut pop single 'Take Me by the Hand' and 2 years later joined the short-lived R&B combo 'Steampacket' alongside Rod Stewart, Long John Baldry and organist Brian Auger.

* next signed on with the 'Brian Auger Trinity', scoring a Top Five UK hit in 1968 with their rendition of Bob Dylan's 'This Wheel's on Fire'.
http://www.youtube.com/watch?v=EJZ435EAPco&feature=related

* with her striking looks and coolly sophisticated vocals earned, was dubbed 'The Face' by the British music press. 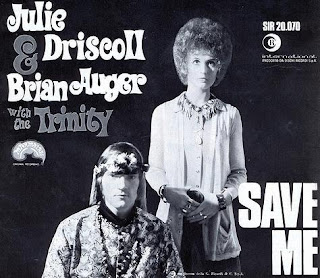 * 'Season of the Witch' in 1968 :
http://www.youtube.com/watch?v=WpizS9h-1Xk&feature=list_related&playnext=1&list=AVGxdCwVVULXdyu8iycbdxo18Ipfy1AzFe

* left Auger for a solo career and debut album 1969 heralded a shift away from pop, enlisting members of the 'Soft Machine' and 'Blossom Toes' to pursue a progressive jazz direction.

* with her 1974 'Sunset Glow', she further explored improvisational vocal techniques in settings ranging from folk to free jazz.
http://www.youtube.com/watch?v=eNuWixvH-10