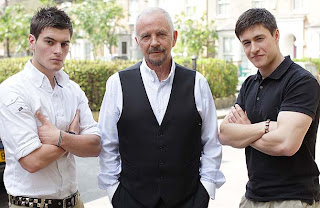 David Essex, is like me, an old London Boy and like me is 64 this year, he being 6 weeks younger than me. David, the old rocker form the 1970's, has just reinvented himself as a character in the long running tv soap, 'EastEnders'.

What you possible didn't know about David, that he :

* was born David Albert Cook in Plaistow, where his father was an East End dock worker and his mother, a self-taught pianist and Irish Traveller.

* was, as a boy, a member of 'West Ham United Juniors Football Club' and dreamed of being a professional player and also became interested in music and played drums with a local band before becoming a singer.

* his first notable acting role was the lead in the stage musical, 'Godspell', where I saw him on the London stage in 1971 at the age of 23.
http://www.youtube.com/watch?v=0PrqIuchd0s

* in 1973 starred in the film 'That'll Be The Day' and recorded his only international hit single, the self penned "Rock On", which sold over one million copies.
Rock On :
http://www.youtube.com/watch?v=NgcYfKw0_TI

With the late Adam Faith and late Keith Moon :
http://www.youtube.com/watch?v=VmQc4Td2lVI

* in 1976 starred in the film 'Silver Dream Racer' and had the soundtrack song as another Top 10 hit in the UK Singles Chart.

* in 2010, at the age of 63 and a grandfather-of-three, married the actress Susan Hallam-Wright who was 26 years his junior.

* was initially due to join the cast of the tv soap opera, 'EastEnders, in 2006, and has now finally joined the cast as Eddie Moon, with his first appearance in June 2011.
http://www.youtube.com/watch?v=-zq3SKrzTig