Britain is a country where old men, clambered over by naked young men at Sadler's Wells, remember 'Oh Calcutta' when they were young men 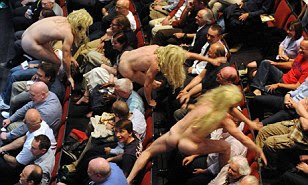 I counted 10 old bald or grey haired men in this photo and deduced that this was an audience of many old men. They were seated at Sadlers Wells, watching 'Un Peu de Tendresse Bordel de Merde' and young naked men were clambering over them.

The Guardian newpaper tells me, that :

* it features 20 dancers, often naked, at times rolling and twisting onstage, at other times dressed only in blond wigs and clambering into the audience to sit on their laps, spit, mock-masturbate or waggle their genitals in their faces.

* the Guardian's Judith Mackrell acknowledged flaws but she found the conclusion a 'redemptive and astonishing coup de théâtre'.

* the choreographer, has declared his aim of 'pushing boundaries in contemporary dance'.

I was reminded of, 'Oh! Calcutta!' which consisted of sketches on sex-related topics, debuted Off-Broadway in 1969 and then in London in 1970 where it ran for over 3,900 performances.

The show sparked considerable controversy at the time, because it featured extended scenes of total nudity, both male and female. The title is taken from a painting by Clovis Trouille, itself a pun on "O quel cul t'as!" French for "What an arse you have!". 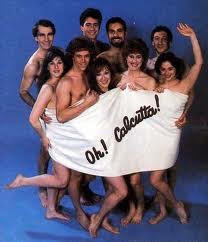 P.S.
Among the cast of 10, who stripped naked in the opening scene to the tune of Oh! Calcutta!, was Anthony Booth, now better known as ex-Prime Minister, Tony Blair's father-in-law.

What a funny old country Britain is.

P.P.S.
The poster shows the painting by Clovis with a red drape, absent in the original, and no doubt added in the interest of what used to be called 'good taste'. 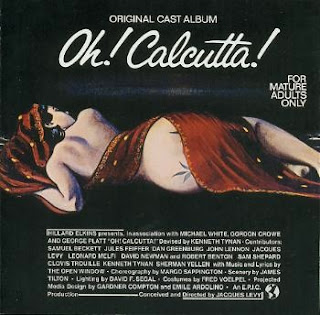