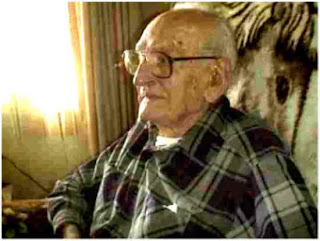 Four years ago in 2007 an article in 'The Telegraph' newspaper was headlined :

Hundreds of thousands of elderly people are being subjected to appalling abuse in their own homes, according to a report today.

At the time the UK Study of 'Abuse and Neglect Report', based on a survey of 2,000 people who lived in their own homes and based on the concept of abuse based on psychological, physical, financial, sexual and neglect, found that :

* 53% of the abusers lived in the old person's home and of those, 65% of perpetrators were recorded as having committed physical, psychological or sexual abuse and two-thirds of abuse was committed by someone in a 'position of trust'.

'as many as 500,000 elderly people may be neglected and abused by carers or relatives.'

Action on Elder Abuse said that :

'Greedy middle-aged sons and daughters were the people most likely to rob their parents of money, valuables and even their homes.'

'research to examine why the problem appeared to be worse in Wales since 6% of old people had been mistreated in Wales, compared with 4.3% in Scotland, 3.9% in England and 3% in Northern Ireland.

"We need to understand better what is happening in Wales. Consequently, we are now calling upon the Welsh Assembly to fund further research into this issue, to discover why older people are more likely to face abuse in Wales than in any other UK nation."

"The findings are disturbing. I think there are real cultural issues in our society in the way we treat older people. What we need to aim for is a society where we are as outraged by the abuse and neglect of an older person as we are by the abuse of a child, and we are a long, long way from it."

Fast forward to 2011 and a few days ago and what did I read in the 'Daily Mail' newspaper, :

What an absolute scandal: 500 claims a week of abuse and neglect of the elderly
A quarter of alleged abusers were relatives.

The figures, the first the Health Service has published on suspected abuse of the elderly, revealed that :

* 500 cases of abuse and neglect of the elderly are being reported every week.

* social services were called in to investigate 25,240 incidents last year including some where care home residents had been locked in bedrooms, tied to chairs or left to go hungry or thirsty.

"These figures show shocking mistreatment of the most vulnerable in our society.
It is extremely worrying to see such high levels of neglect and abuse in residential home settings. The figures also raise concerns about the quality of domiciliary care, which is delivered in a person’s home behind closed doors and so problems are likely to be under reported."

Paul Burstow, the Care Services Minister, said:
"These figures are an absolute scandal; no one should have to put up with abuse."

Labels: old men unsafe in their own homes