Britain is country which says "Goodbye" Colonel Peter Storie-Pugh, the once and last surviving prisoner of Colditz Castle 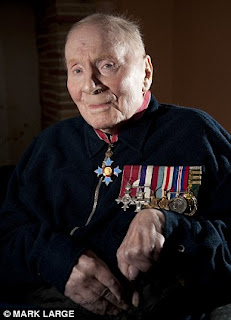 The last surviving Second World War 'Colditz Castle' prisoner, Colonel Peter Storie-Pugh, who was involved in 21 escape attempts has died at the age of 91. 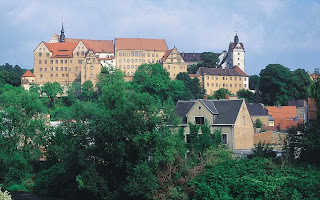 Things you possible didn't know about Peter, that he :

* was sent to the high security German prison in 1940 as a 21 year old lieutenant who was classified as 'a prisoner who would persistently try to escape' and the last of British servicemen which included legendary figures such as Pat Reid, author of the book that was the basis for the 1955 film 'The Colditz Story.'


* was captured in May 1940 during the withdrawal to Dunkirk, escaped from prison camp, was re-captured on November 1, 1940 his 21st birthday, imprisoned in Spangenberg Castle, escaped again and later said "I stayed outside when everybody else went in after roll call, I got into a drain, crawled around and cut through the wire."

* was again captured, then transferred under heavy guard to Colditz and later said : "I’d never heard of it before,but it was daunting, a whopping great castle. I remember the smell of disinfectant struck me. The Germans had a thing about lice."

* had his first involvement in an escape in the ‘Canteen Tunnel’ which involved 13 men making an unsuccessful attempt to escape through the sewer system to a lawn near a wall that was only 12ft high.

* said: "The Germans knew about some of the tunnels, I think, they let it go on and timed the moment of discovery to dent morale."

* in 1942, attempted another escape by tunnel with two Dutch prisoners who were discovered by the guards and he was quick-witted enough to use the confusion to save a valuable bag of escape tools from being found by throwing it over the Germans’ heads to waiting comrades.

* never gave up trying to escape and also helped others to break out of the castle and finally tasted freedom when Colditz was liberated by the Americans at the end of the War.

* after the War, felt no bitterness towards his former guards and even invited Hauptmann Reinhold Eggers, the Colditz 'Chief of Security', to his second wedding in 1971.

Peter,in the photo, on the far right with 5 other erstwhile prisoners who returned to Colditz. 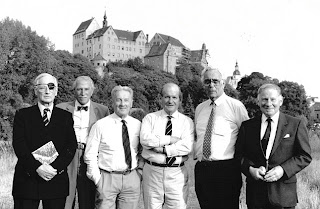 Prisoner reminiscences of life in Coldittz from men who have all now gone :
http://www.youtube.com/watch?v=VJC7ivpH6qc&feature=related

Peter himself on a visit to Colditz :
http://www.youtube.com/watch?v=FlN0LGF9GcM