Britain, no country for poor old men who can't afford to heat their homes in what might be their last winter... fear not ! 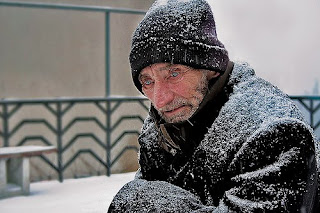 A recent study which suggests that as many as 2,700 old Britons die each winter because they cannot afford to heat their homes has highlighted a problem which has been reported continuously over the years over the years by :

* 'AGE UK' in 2003 :
Britain is a rich nation; its old people should not be dying of the cold ...
.. why Britain has such an appalling record of older people dying at this time of
year is because. ...

* BBC in 2008 :
Thousands of elderly people are dying each winter in a 'national scandal'..

* The 'Daily Telegraph' in 2010 :
Nine elderly people died every hour from cold related illnesses last winter
against a background of freezing temperatures and soaring energy ...

So what has the Government done to alleviate the problem ?
Apparently, nothing. In fact, despite sky-high energy prices, it has cut winter fuel payments this year from £400 to £300 for the over-80s, and £250 to £200 for all other pensioners.

So rather than target those old people most in need the Government has cut the payment for all.

Poor old men, however, need fear not ! Help is at hand. Politicians and public figures have joined 'Saga' to support the 'Surviving Winter Appeal'.

The idea is very simple : WEALTHY OLD PENSIONERS WHO DON'T NEED THEIR WINTER FUEL PAYMENT SHOULD DONATE IT TO THOSE WHO DO.

It is very gratifying to see some very rich old men have got behind the idea like :

* actor Sir David Jason : "It would be great to think that all those people who are in a position to forgo part or all of their own winter fuel payment could join this great scheme and spread a little warmth."

Britain's poor old men who might die of the cold this winter say :

Labels: Old men who die of the cold