An article in 'The Observer' newspaper today was entitled :

It analysed the features of Italian society which explained its present financial crisis and said :

' Which is where aversion to change comes in. It is not just the outgoing prime minister who is 75. The young are blocked in almost every walk of life, even rock music :

Berlusconi's best-known news anchor, facing trial for supplying him with "bunga-bunga" girls, is 80 and the top TV current affairs presenter is 77. 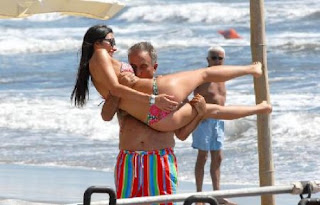 The article went on :

' Italians leaving school or university face a choice between surviving on an endless succession of short-term contracts or going abroad to work, as hundreds of thousands have done. If they stay, they find the efforts of the unions are devoted overwhelmingly towards safeguarding the privileges of the upper tier, disproportionately composed of older, male workers in dying industries or the public sector.'

Labels: Italy is a country for old men