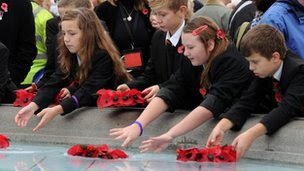 Children placing remembrance poppies in the fountain at Trafalgar Square this morning.


They did this because it is 'Remembrance Day' when Britain remembers the servicemen who died in the First and Second World Wars and other conflicts in the last century and this century. At 11 o'clock this morning on the 11th day of the 11th month of the year 2011 much of the country stood still for two minutes as a mark of respect.
BBC :
http://www.bbc.co.uk/news/uk-15676087

This day of the year is chosen because it was at 11 o'clock in the morning of November 1918 that the guns fell silent on the Western Front in the First World War, in which Britain had lost 886,939 men dead in 4 years of conflict against Germany and its Allies.

Among the old soldiers standing to attention at the Cenotaph in London there may have been some who served as 'Chindits', the largest of the Allied Special Forces of the Second World War. They were formed and lead by Major General Orde Wingate and operated deep behind enemy lines in North Burma in the War against Japan and lived in and fought the enemy in the jungle. 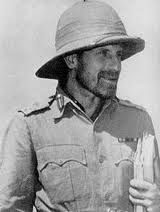 There were two Chindits expeditions, the first in 1943 consisted of a force of 3,000 men of whom 1000 returned, the second consisted of 20,000 British and Commonwealth soldiers in 1944, was the second largest airborne invasion of the War, Wingate, was killed a few weeks after the launch and at the end of the operation only 5,000 men returned.

A new book, 'War in the Wilderness: The Chindits in Burma, 1943-1944' tells the little known story of the Chindits, who took their name from the Burmese mythical beast 'Chinthé' or 'Chinthay', whose statues guarded Buddhist temples.

In the first expedition the men :

* marched 1,000 miles on foot
* survived for months on air-dropped emergency rations
* carried a kit on their back which was half their body weight
* endured 100 degree heat, high humidity and monsoon rain
* slowly starved on rations which gave a 1000 calorie deficit each day
* risked being ambushed by the Japanese at any time

I listened to the author of the book, Tony Redding and an the old Chindit soldier, John Huthcings, on Radio 4 :

Apparently, there are only a thousand Chindit soldiers left alive and their story of heroism has been largely forgotten. I was moved by the testimony of John who :

* flew into Burma in 1944 to help set up bases and stop the Japanese invading India.

* after taking part in a fierce battle and long march through the jungle, suffered from total exhaustion and was left behind with 3 days rations and an extra clip of ammunition.

* met up with Chinese forces working with the Americans and found the energy to march again for 3 - 4 days to catch up with his column and was flown out of Burma.

As a 'baby boomer', born after the Second World War, I would only feel humble in the presence of men like John who said when asked about his exploits said :

" What was the point of talking about it. We did what we had to do. We are terribly proud of being Chindits. I've only got one nightmare left, and that is being left." 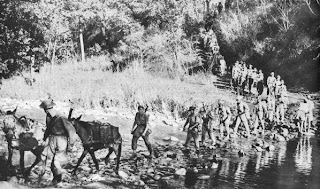