Ken Russell died at the age of 84 on sunday and Ridley Scott is 74 today.

Question : Did these two great film directors have anything in common when they were boys and young men ?
* Ken was grew up in Southampton, where his father ran a shoe business and Ridley in South Shields, his father was a colonel in British Army and absent for most of his early life. 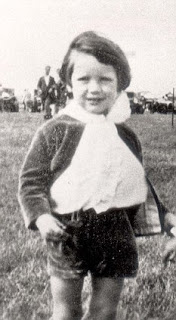 * by the age of ten, after he was given a cinema projector, Ken was screening Charlie Chaplin movies in the garage while his relatives watched from the warmth of the family car and Ridley's favoutite films were 'Citizen Kane' and 'The Seven Samurai'.

* at the age of 15, Ken was sent to the strict Pangbourne Nautical College, which prepared boys for the Merchant Navy and Ridley attended Grangefield Grammar School.

* after leaving school Ken joined in the Merchant Navy in The Second World War
and was discharged after a voyage in the Pacific where he said : 'we had a mad captain who thought a Japanese submarine was going to attack us. I went slightly strange and a doctor said I had anxiety neurosis', whereas Ridley studied design at West Hartlepool College of Art.

* Ken's first job was as a dancer in the chorus of the touring show of 'Annie Get Your Gun' and then in the late 50's, got a job in the BBC making film profiles of the poet John Betjeman and comic Spike Milligan, whereas Ridley in the 1960's got his break working on the popular television police series 'Z-Cars' and the science fiction series 'Out of the Unknown'.

Answer to the question : well, apart from that they both enjoyed films as boys and both worked for the BBC, the answer is :
they had absolutely nothing in common.

Ken's career from the BBC :
http://www.youtube.com/watch?v=oY4kBL-leqI

My favourite film of Ken's, 'Women in Love' :
http://www.youtube.com/watch?v=fYCQok8xVbo

P.S.
Who would have thought that this College would produce Ken ? :