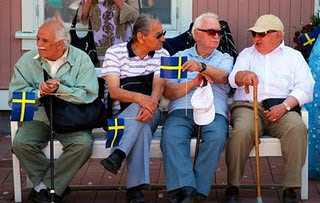 I was intrigued by an article in 'Daily Mail' newspaper entitled :

Life begins at 70!
The passion grows with the passing years.
Elderly are cleverer, happier… and having more sex than they did 30 years ago.

Closer inspection revealled that it was based on a long-term research project at Gothenburg University in Sweden led by Professor Ingmar Skoog, who said:

"This is the rock and roll generation born in the 1930's and 40's now getting old and they are not going to be sitting on a park bench feeding the birds. Being 75 today is probably like being 55 was 30 years ago. It's time to start talking about the 'new old age'."

The project started back in 1971, when more than 1,000 70-year-old men and women born in 1901-02 were examined by doctors and interviewed about their lives to obtain a picture their diseases, functional capacity and social networks. They were examined again at the age of 75 and then at regular intervals until the last one died at the age of 105.

In 2000, a new study of 70-year-olds born in 1930 using the same methods and comparing them with their earlier counterparts revealed that old men in Sweden today are :

* having more sex than those of their age 30 years.

* enjoying better quality sex, which could be due to a fall in impotence rates and more divorces triggering fresh relationships.

* according to intelligence test scores, smarter than ever, due to better schooling beyond secondary level which has risen from 14% to almost 40%.

* more outgoing than they were in the 1970's and talk more to their neighbours, yet the number who 'feel lonely' has increased.

* are not suffering from more dementia disorders, yet more consider themselves to be 'mildly depressed'.

Prof Skoog concluded that : " pensioners are generally healthier and perkier today than they were 30 years ago. This may be of interest both in the debate about where to set the retirement age and in terms of the baby boomers now hitting retirement age."

Here the Professor is talking about 'I know not what', but I love the sing-song quality of his Scandinavian voice :

I also like the voices of these two old men with their pet moose :

Labels: Sweden is a country for old men