Britain is no country for the memorials of old soldiers 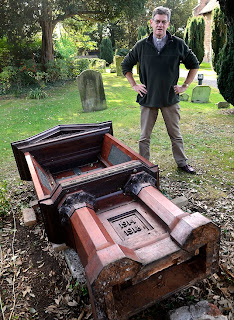 This photo of Vicar Kevin Scott at The Old Malden monument, in Surrey, after thieves pushed it the ground to steal a strip of lead worth £5.

Apparently, a spate of theft of statues and brass plaques and vandalism has wrecked hundreds of military monuments across the country, which provide the setting for services commemorating those who lost their lives in action.

Frances Moreton, Director of the War Memorials Trust, said there had been a sharp increase in thefts as the price of metal has risen on the world market. "We used to hear of one theft a week at the start of the year, it rose to two or three over the summer. There have been cases of stuff being put of for sale on the Internet but increasingly it is the case of metal being stolen because of its value.
It’s very sad to see memorials being targeted and the names of those who have given their lives for their country being lost."

Only a handful of metal thieves who steal war memorials have ever been brought to justice and only one in ten of the stolen plaques and statues are ever recovered. 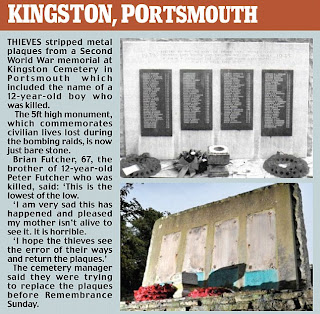 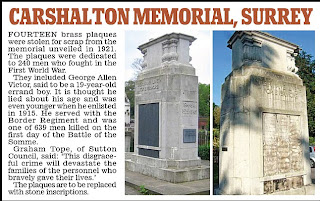 Ealier posts where I have featured old servicemen :

Wednesday, 10 November 2010
Britain, once a country enthusiastic for war, thought it had said "goodbye" to it at 11 o'clock in the morning on the 11th of November 1918
http://britainisnocountryforoldmen.blogspot.com/2010/11/britain-was-once-country-enthusiastic.html

Thursday, 5 May 2011
Britain is a country which says "Goodbye" to Claude Choules the last remaining veteran warrior who fought for Britain in The First World War

Sunday, 4 October 2009
Britain is a country where some remarkable and ordinary old men still live
http://britainisnocountryforoldmen.blogspot.com/2009/10/britain-is-still-country-where-some.html

Monday, 17 October 2011
Britain is a country for less and less old men who fought in The Second World War and tell their story for the last time
http://britainisnocountryforoldmen.blogspot.com/2011/10/britain-is-country-for-less-and-less.html

Thursday, 19 August 2010
Britain is a country of fewer and fewer old men who, when young, fought Japan in The Second World War

Monday, 25 July 2011
Britain is no country for sad old men who once fought for it in the Second World War and now think they have lost it
http://britainisnocountryforoldmen.blogspot.com/2011/07/britain-is-no-country-for-sad-old-men.html

The image of a drunk student urinating on a war memorial provoked a furious backlash from relatives who had laid wreaths of poppies in tribute to their loved ones back in 2009. 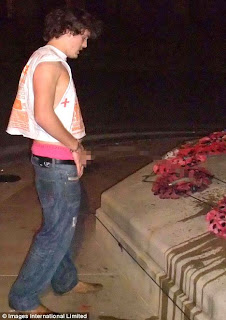 Labels: No rembrance for old soldiers