An article in the Guardian newspaper marking 'Remembrance Day' for servicemen who have given their lives for Britain was entitled :

'I'm an old man, I am supposed to be tough. I thought I was hard, but I'm not. He's my Dad and I miss him'
The First World War left many children fatherless. It ended 93 years ago, but does time heal the pain? 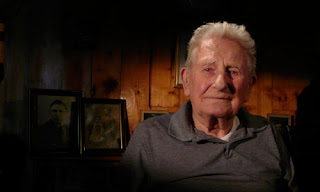 Donald Overall is 98 years old and his father died of wounds near Arras, in 1917, leaving his mother a widow with two young sons.

He recalled that :
" I was five when my father came home on leave. He sat me on the instep of his foot, and I used to hold his hands and he would rock me up and down. He was in his army uniform and I could smell his khaki and tobacco because he smoked a pipe. I then remember him carrying me upstairs on his shoulder."

Donald was one of the 360,000 children the War left without a father. Very few now survive, the youngest are in their 90's, the last of those who lost a father in the trenches of the Western Front, on the beaches of Gallipoli or in the deserts of the Middle East.

" I remember the day we heard [about his death] very distinctly. Mother and I were downstairs in the hall when the doorbell rang. I was hiding behind her as she was handed an envelope. I remember she opened the letter immediately. I didn't know what it said but she screamed and collapsed on the floor. I didn't know what was wrong.

Mother stayed in her bedroom for about 10 days and then she turned on her side and said to me, "Your father's dead, he won't come back. Now you are the man of the house." And I said, "Me, Mum?" I was five years old. That changed my life – it had to. 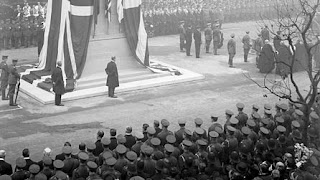 On 11 November 1920, I was with Mum and my brother at the Cenotaph when it was unveiled by the king. I remember that nobody dared move; nobody wanted to move. There was the Cenotaph resplendent, spotlessly clean. My mother stood there with her arms around us two kids and she cried, and I just stood there dumbfounded.

I can't forget that day. I was feeling for my mum and I'd never had to confront those feelings before."

Donald visited his father's grave in France in 2007 and said at the time: "I'm an old man, I am supposed to be tough. I thought I was hard, but I'm not. He's my Dad. I miss him. I missed him as a boy and I miss him as an old man. It is very important that I have come back. I feel closer now than I have ever been. That time he carried me to bed was the last time and this is the next time."

My earlier post marking the passing of the last veteran from the First World War :

Labels: old men remember their fathers who died in the First World War