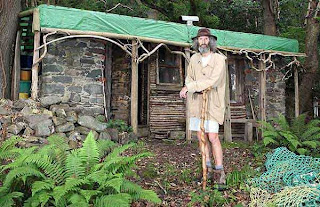 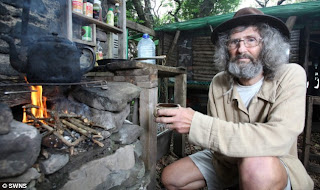 * had as home, for a quarter of a century, a driftwood shack in Embelle Wood in Exmoor National Park above one of Britain's remotest beach hideaway.

* led a perfectly peaceful existence, watching the world go by, listening to the waves and marvelling at the sunsets.

* boiled a kettle on a stone-built stove and had his favourite books arranged on a reclaimed wooden shelf and a picture of a mysterious maiden strolling on a summer shoreline.

* might pick up litter to recycle from the beach, scavenge pieces of wood worn smooth by the surf, maybe rustle up a meal or two.

David now finds that the bosses at Exmoor National Park have discovered they have him as an 'uninvited' guest on their land and have ordered him to leave and he initially submitted a claim for ownership of the shack he became entangled in a legal battle and has now withdrawn the claim.

The National Park maintains it has owned the woodland and buildings since 1974 and a spokesman said: 'As long as Mr Burgess has dropped the ownership claim we are happy to talk to him about how he can enjoy the area. We really don't want to see legal action."

* has his shack in an area where few venture and is only accessible to intrepid ramblers which is probably the reason only a handful of people knew of the existence of the man they call 'Driftwood Dave' and why fewer still seemed to care.

* when asked about the ownership of the land has said : "We belong to the land. The land doesn't belong to us. I don't think I'm squatting. I love being next to nature. I've never been lonely and I enjoy my own company."

* has salvaged a collection of nets, brushes, pots, pans, plastic containers to store food and has made a hammock from fishing nets and used washed-up tarpaulin as a roof.

* has said : "In the summer I sometimes get up before it's light, watch the sun come up, make a cup of tea, read a book, listen to birds… it's wonderful, really tranquil."

* does use a car to drive 4 miles to his nearest village shop, earns cash doing garden work and posing as an anatomy model for art students and has a mobile phone and when the weather gets too bad he stays with friends in Exeter.

When Dave began to build his home in the spring and summer of 1985, the miners had just gone back to work after a crippling strike, Mikhail Gorbachev was elected Soviet leader and 17-year-old Boris Becker won Wimbledon.