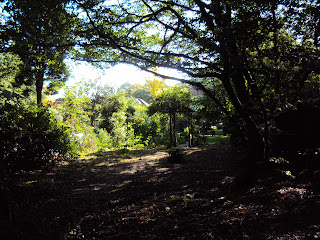 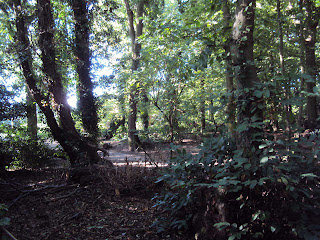 I took these 2 photos this morning, the first, looking down my garden towards the house and the second, over the fence, showing the ancient woodland called East Hoath Woods, after I had read an article in 'The Telegraph' entitled :

Vast areas of ancient woodland could be lost if the Coalition Government's planning reforms become law, conservationists have warned.

* there are about 760,000 acres of ancient woodland remaining in Britain and 'The Woodland Trust', which campaigns to preserve what is left of the country’s historic woods, fears that proposals aimed at simplifying planning regulations will lead to thousands of trees being chopped down to make way for developers.

* the Government’s proposed 'National Planning Framework' aims to make it easier for developers to build homes, commercial properties and transport projects by removing red tape and reducing 1,000 pages of planning regulations to 52.

Sue Holden, the Chief Executive of the Woodland Trust, seen here lobbying the Prime Minister, has highlighted one caveat contained in the proposed new law which she suggests could allow developers to chop down trees where 'the development in that location clearly outweighs the loss' and has urged the Government to remove that caveat to offer some protection to ancient trees and woodland.

“New guidance must be clear; no development should bring about the loss of ancient woods or trees,” she said.

As well as the 'Woodland Trust', the 'National Trust', the 'RSPB', the 'Campaign for the Protection of Rural England' and the 'Open Spaces Society' are among the groups who have called for a rethink. 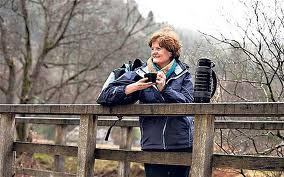 “The National Trust is not against new housing or development: we just want it to be properly managed, and for a proper balance to be struck between economic, social and environmental concerns.”

I have no doubt that all this opposition won't make a scrap of difference and we are about to say "Goodbye" to thousands of acres and hundreds of thousands of old trees.

P.S.
All this reminded me of Errol Fynn's Holywood film of 'Robin Hood', made 9 years before I was born in 1938 and which, I no doubt saw at the cinema, when I was a small boy. I still think the Holywood 'forest' is wonderful :
http://www.youtube.com/watch?v=LrwaBzIbR_U

Labels: No country for old trees and Robin Hood