Britain is a country which says "Happy Birthday" to an old thespian called Sir Ian Holm, player of elf, android and king 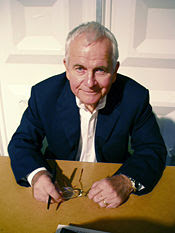 Sir Ian Holm, British actor known for his stage work and for many film roles is 80 years old today.

What you possibly didn't know about Ian, that he :

* was brought up in Essex, where of his Scottish parents, his mother was a nurse, and his father a psychiatrist, the superintendent at a mental hospital and one of the pioneers of electric shock therapy.

* joined an amateur dramatic society while living in Worthing and gained a place at the Royal Academy of Dramatic Art in 1949 and after graduating in 1953 worked at Stratford for 13 years, where Peter Hall had founded the Royal Shakespeare Company in 1960 and played the elf, Puck, in 'A Midsummer Night's Dream' at the age of 37 in 1968 :
http://www.youtube.com/watch?v=jl2SyZa7N7g">http://www.youtube.com/watch?v=jl2SyZa7N7g

* had his first film role to have a major impact as the treacherous android, Ash, in Ridley Scott's film 'Alien' in 1979 at the age of 48.
http://www.youtube.com/watch?v=fZxKGxNmWz4&feature=related

* in 1981, saw his portrayal of Sam Mussabini in 'Chariots of Fire' earn him a special award at the Cannes Film Festival and an Academy Award nomination for Best Supporting Actor.
http://www.youtube.com/watch?v=QDXsIKASbrA