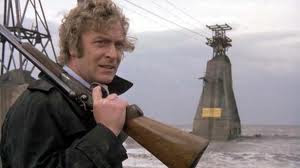 Michael Caine, film actor, is 78 and, in my opinion and made, his best film, 'Get Carter', when he was 38 and I was 24 in 1971.
I remembered a couple lines in the dialogue between Michael as Jack Carter and the chauffeur called 'Eric', played by Ian Hendry :
Carter: "You know, I'd almost forgotten what your eyes looked like. They're still the same. Pissholes in the snow."
Eric: "Still got your sense of humour."
Carter: "Yes, I retained that, Eric."
http://www.youtube.com/watch?v=oPgToITPEHU

It came as a surprise to me to come across the 'eyes' in a poem by Herbert Lomas, who has died at the age of 87, in his collection : 'A Casual Knack of Living' and called :

Yer eyes are like pissoles in snow.
Sergeant Birkett fixes us
with a seagull stare.

Six weeks, and he'll crack the same joke
to a new intake. This too is a stage,
and the old jokes are best.

Then a cold-water shave in the ablutions,
with no light, though now there's
light enough for the officer to check our shave.

We ourselves are hot khaki pissoles
in the cold snow
of defending our country.

Then a bit of research revealed that 'eyes like pissholes in the snow' was Army slang for 'deeply sunken, bloodshot eyes' and therefore Herbert and the late Ted Lewis who wrote 'Get Carter' were both using the same source. 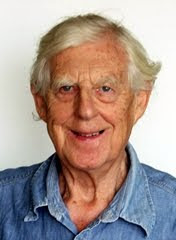 What you possibly didn't know about Herbert, that he :

* at 7, knew he was a poet when told to write a poem beginning : 'I like the trees with leaves of green', was inspired by the little girl next to him who thought the next line should be 'The stately form, just like a queen,' and posed like a mixture of a tree and statue; his poem won the day and from that moment on, his devotion to women was as unswerving as it was to poetry.

* had a mother, who was the daughter of a bankrupt mill-owner and father, the son of a master dyer and ascribed his talent to them being highly articulate parents with a love of language. 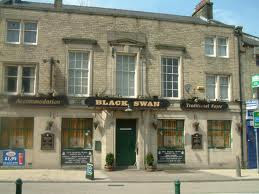 * was brought up in the Pennines, born in the 'Black Swan' public house in Todmorden his parents owned and brought his childhood in the once-thriving mill town vividly to life in his 2003 collection 'The Vale of Todmorden' of which the critic, Simon Hoggart wrote: ' I don't know when else a time and a place have been so beautifully evoked.'

* in 1942, during the Second World War, won a place at Liverpool University to read English, had his studies interrupted when called up to serve in the Army on the North-West Frontier of India and recorded 'the tomfoolery, comradeship, cruelty and sometimes exaltation of what it was like to be young in the Indian infantry' in his 1998 collection of poems, 'A Useless Passion'.

* was demobbed from the Army in 1946, returned to Liverpool finished his degree, taught English on the Greek island of Spetses and then moved to Finland where he was appointed a senior lecturer at the University of Helsinki.

* returned to England in 1965, became a principal lecturer in London University and in 1972 mounted a witty and persuasive attack on capitalism in 'Who Needs Money?', which Anthony Blond considered to be the best book he ever published.

* wrote 'Death of a Horsewoman' and 'A Useless Passion' and dedicated them to his American wife Mary, following her sudden death while out riding in 1994.

* was a prolific translator from Finnish to English, a member of the Finnish Academy and made a Knight First Class, Order of the White Rose of Finland, 'for his services to Finnish Literature'.

* was a deeply religious man all his life and received into the Roman Catholic Church in 2009.