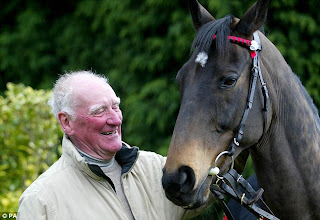 Ginger McCain one of Britain's great horse racing characters who trained one of the greatest racehorses of all time, the Grand National legend 'Red Rum', has died at the age of 80.

What you possibly didn't know about Ginger was that he :

* was born in Southport and went to his first 'Grand National' horse race, 15 miles away at Aintree, at the age of 9 and later wrote : 'To a young boy, it seemed like the whole world had turned up.'

* left school and drove a horse-drawn float for a local butcher, then worked for a car hire company and had passengers in the shape of Frank Sinatra, Norman Wisdom, Margaret Rutherford and a handler with a lion, who sat salivating menacingly in the back, while being driven to London.

* started to train racehorses in 1953 and had to wait until 1965 to send out his first winner, San Lorenzo, in a steeplechase at Liverpool and combined training with a secondhand car business with the stables tucked behind the car showroom.

* in the early 1970's, struck up a friendship with a local businessman, Noel le Mare and in 1972, for 6,000 guineas, bought the 7 year old 'Red Rum' who had endured a tough racing schedule from the age of 2 and had already been through the hands of 4 trainers. 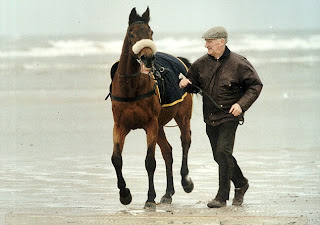 * found Red Rum's potential severely compromised by 'pedalosteitis', a disease of the hoof and working him on Southport sands, found galloping through seawater worked wonders on his feet. 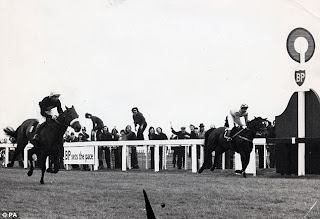 * saw the horse start joint-favourite in the 1973 Grand National, along with the brilliant Australian horse 'Crisp', who built up a gigantic lead and within half a mile, was in remote pursuit, but caught him a few yards from the winning post to win by three-quarters of a length and demolished the course record in the process.

* a year later, saw the horse win again and become first two time National winner since 1936 and when Red Rum lined up for his fifth consecutive National in 1977, saw the now 12-year-old win with ease, prompting commentator Peter O'Sullevan's famous call: "It's hats off and a tremendous reception – you've never heard one like it at Liverpool."

* moved his training operation from Southport to the Cholmondeley estate in Cheshire in 1990, he sent out his fourth Grand National winner, 'Amberleigh House', in 2004, 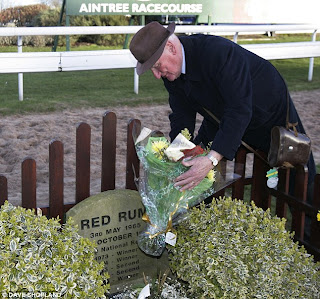 P.S.
My own acquaintance with horse racing was a short lived experience over 40 years ago when, living as a student in Brighton, I made the acquaintance of E.S., the one with the pot in the photo whose father owned a betting shop in London. E.S. took me to greyhound racing at Hove and in 1967 we went to the Derby at Epsom and saw Royal Palace win. I can't remember if I'd had a bet on him.