A report in the 'Observer' newspaper today was entitled ;
Gay people 'at risk of a lonelier old age'. Campaigners warn of looming care problem as Stonewall survey predicts health and housing crisis.

It stated that it is estimated that there are a million lesbian, gay and bisexual people in Britain over the age of 55 and made the following points based on a 'YouGov' survey, commissioned by the campaign group 'Stonewall' based on 2000 heterosexual and LGB people over the age of 55, that :

* thousands of gay men are growing older without the same family and support structures which many straight people enjoy and are far more likely to end up living alone.

"This pioneering research confirms what we already knew intuitively, that there are hundreds of thousands of lesbian and gay people growing older without the same family and support structures that many straight people enjoy. Quite often, that's because their own families have disowned them just because of the way they were born."

The prospects of a solitary old age may be one explanation why the survey suggests gay men are consistently more anxious about growing older than heterosexual people. 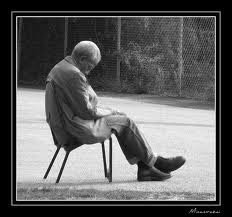