Britain is still a country where old men, with true grit like Roger Allsopp, swim the English Channel 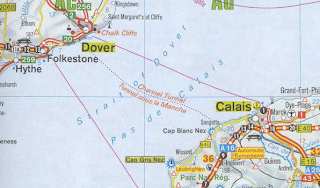 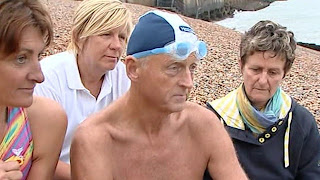 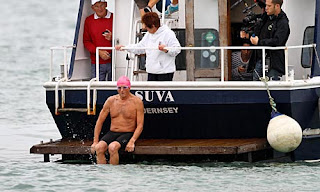 Retired breast cancer surgeon Roger Allsopp, who is 70 years old, has become oldest person to swim the Channel after covering distance from Dover to France in 17 hours and 51 minutes.

As he recovered from his ordeal in Dover and toasted his record, Roger, from Guernsey, said:
"I feel really, really good about it. The alternative to fail would have been very sad. It was very hard work and I had to work all the way. My body has told me not do anything like this again."


On seeing France come into view, he said: "I thought it was a long way away and the last bit was particularly hard. I remember treading on sand but I don't remember anything after that until about halfway home on the boat."

Roger described his feat as "an incredible personal challenge" and was hoping to raise thousands of pounds towards a cancer research machine at the University of Southampton.

Roger in his own words and with great understatement :
http://www.bbc.co.uk/news/world-europe-guernsey-14716970

P.S. Roger ran the London Marathon at the age of 60 and completed his first Channel swim at the age of 65 in 2006, becoming the oldest Briton at the time to do so.
He has said :
"I've never been one to sit on my laurels. Retirement has been wonderful but I know how important it is to keep active in mind and body to live a healthy retirement and so I set myself physical challenges to ensure that I keep as fit and healthy as I can."