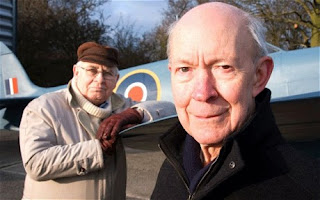 I'm not sure, but I think this might be a photo of 92 year old Geoffrey Stone who worked at RAF Medmenham at 'The Centre for Interpretation' based at Danesfield House from 1940-45, during the Second World War, in one of the largest photographic reconnaissance operations ever undertaken. Although, Geoffrey now speaks openly about his work think that for many years he lived in anonymity under the cloak of the 'Official Secrets Act'.

I heard him speaking on the BBC Radio 'Today' programme yesterday, interviewed by John Humphreys along with the writer, Taylor Downing, whose book,'Spies in The Sky' focused on the work of the Centre.
http://news.bbc.co.uk/today/hi/today/newsid_9582000/9582027.stm

Taylor made the following points, that the interpreters :

* worked in a requisitioned country house "filled with a group of academics, boffins and mathematicians - the best and most brilliant minds,recruited to understand what was going on in Occupied Europe in from the Summer of 1940 onwards".

* who were railway experts worked out what trucks were being used at particular stations and whether they were transporting coal or food.

* looked at photos of V2 rockets 2mm long and estimated they were 22-24 feet in length with a range of 130 miles and assumed the target might be London.

* he was transferred from the Army to Medmenham because he was " good at crossword puzzles and puzzles of all sorts."

* there were archaeologists because they were used to "inferring from hints and clues".

* a young Lieutenant, Derek Jules Gaspard Ulric Niven van den Bogaerde, later known as the actor Dirk Bogarde, worked there and although "not distinguished in any way, was a very good interpreter".

* that 80% of intelligence came from aerial photos taken by pilots who flew over enemy territory with guns and armour plating removed who "only had their speed and their daring".

* their photos were sent to Medmenham to go through 3 levels of interpretation and the Allies could understand the building of new factories, predict a year in advance the number of U boats being built and see the damage after an air-raid to see if it needed to be re-bombed.

John Humphreys asked Geoffrey if the people who worked there wanted recognition ?

* they worked at it like mad, it was very hard but it was its own reward.

* he was privileged to have worked there with admirable people and didn't think they wanted publicity.

Geoffrey is an example of the old fashioned British virtues of 'modesty' and 'understatement', things which, along with men like him, are fast disappearing from the Britain of today. 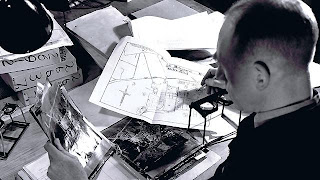