Britain says "Happy Birthday" to a very old man called Alistair Urquart, a remarkable and angry survivor from the war against Japan 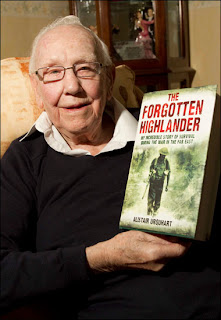 Alistair Urquart who is 92 years old today, told his story of remarkable survival against all odds in the Second World War in his book, 'The Forgotten Highlander'.
Old soldiers like Alistair came to think of themselves as the 'forgotten army', men who endured years of suffering in Japanese Prisoner of War Camps and when they came home, never spoke of what they had seen and suffered.

He has said that "I am breaking my silence now, to bear witness. I am a lucky man, but I am also an angry man and my business with Japan is unfinished.
Germany has atoned. Young Germans know of their nation's dreadful crimes. But young Japanese are taught nothing of their nation's guilt."

Things I, and possibly you, did not know about Alistair, that he :

* was born in 1919 in Aberdeen in Scotland, conscripted into the Gordon Highlanders Infantry Regiment at the age of 19 in 1939 at the start of the Second World War, was stationed in Singapore and taken prisoner when the Japanese invaded the island in 1941.

* was transported with other prisoners of war, deep into Thailand on rice trucks which were more like steel coffins and made a long march on which many died from dehydration and exhaustion, through the jungle to a prison camp.

* was sent to work on the Burma Railway, referred to as 'Death Railway' because of the tens of thousands of forced labourers who died during its construction and where he suffered from malnutrition and cholera.

* was placed punished inside 'the black hole' where he survived on a few handfuls of rice a day and for years, went barefoot and naked except for a simple loin cloth.

* said of the 1957 film 'Bridge on the River Kwai', where the men whistled 'Colonel Bogie' and the officers valiantly defied their Japanese guards, that it sanitised the depths to which the men sank, building of the infamous railway bridge.

* after another 'death march' through the jungle, was taken back to Singapore and was loaded with 400 other men into the hold of a cargo ship where there was standing room only and in the airless, fetid, baking heat, many died.

* after the ship sank having been torpedoed by an US submarine, was burned and swallowed some oil which caused permanent damage to his vocal cords, spent five days and night alone floating on a raft and when he was picked up by a Japanese whaling ship, was dehydrated, hallucinating and close to death.

* was taken to Japan, sent to work in coal mines and later a labour camp ten miles from the city of Nagasaki and when it was hit in 1945 by the atomic bomb dropped by the United States and the blast of hot air knocked him off his feet.

* with the end of War, when re-united with his family, found they scarcely recognised each other in a country which did not understand what he had endured and which, for the most part, did not want to know and where for 60 years he didn't speak about his experience even to his wife who died after 46 years of marriage.

* has lived in Dundee for many years where he teaches retired people how to use computers and attends and teaches ballroom dancing.

I wonder what Alistair now thinks of the country that he almost gave his life for on so many occasions ?