Britain, soon to be no country for old men given cheap coach travel 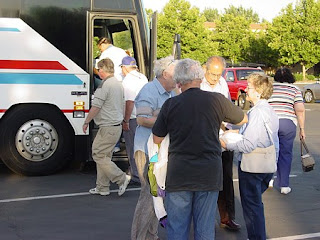 As part of its cost cutting, the Government is abolishing half price coach concessions for old and disabled people from 1st November 2011 and to give an idea of the likely impact, in the last year 2.9 million concessionary journeys were made on National Express coaches alone.

'Disability Alliance', 'Age UK' and 'Campaign for Better Transport' believe that the cut to the concessionary fare scheme will significantly disadvantage the disabled and the old.

Michelle Mitchell, Charity Director of 'Age UK' has said :
'Many older people depend on the coach concession to get out and about, to see friends and family or travel further afield if they wish. The coach concession is an effective way of preventing loneliness and social isolation of people in later life.'

Age UK is calling on the government to delay plans to cut the concession to allow enough time to consult properly with concession pass holders and operators.'

The end of coach concessions also risks the future of some coach routes, especially in rural areas.

In addition, no public consultation has been conducted on this issue and disabled and older people have been excluded from the debate and decision-making process – possibly unlawfully.

What a sad, harsh and uncharitable country Britain has become.

Back in February the 'Daily Mail' ran a story entitled :
So much for the age of austerity: Cameron's new gas-guzzling Jaguar which has cost the taxpayer £200,000

Mr Cameron as Prime Minister has, of course, given the 'O.K.' to the coach cuts for the less fortunate old people who live in the country he governs.