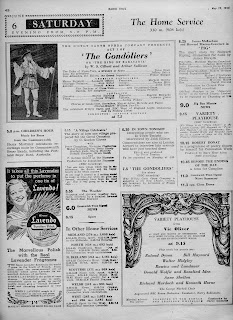 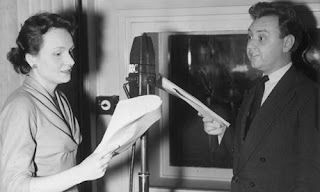 'Phil Archer',who died yesterday, at the age of 85, was an interesting man. He worked on the World's longest broadcast 'soap opera', 'The Archers', for nearly 60 years.

He was Norman Painting and I suppose he was part of my life in the early 1950's, when there was only B.B.C. Radio and nothing else in terms of 'home entertainment'.

At the top, 'The Radio Times' page for the Saturday of 'Coronation Week' in June 1953. It shows the listing for 'The Archers' for that day, which gave you a bumper edition, if you'd missed the 5, 15 minute episodes in the week.
The Queen had married the Duke of Edinburgh on the Tuesday. It was a National holiday and at the age of 6, I had a day off school.

The photo of Norman reading his script with Grace Archer in the 1950's is intriguing because, I would never have associated his voice, which I have heard so many times over the last 50 years, to that face.
That voice was the one of the 'everyday country folk' living in the mythical 'Borsetshire' village of 'Ambridge'.

Originally produced with input from the Ministry of Agriculture, 'The Archers' was conceived as 'a means of disseminating information to farmers and smallholders to help increase productivity in the post Second World War years of rationing and food shortages'.

Painting was invited to play the part of Phil for a pilot series introduced by the same dum-de-dum-de-dum-de-dum tune it has today.
http://www.youtube.com/watch?v=wNEawM6vZf4&feature=player_embedded

History, for the Archers and the BBC, was made on 22 September 1955 when, in a brilliant piece of competitive scheduling, on the night that commercial television was launched, Grace Archer, Phil's wife, died in her husband's arms after attempting to rescue her horses from a blazing stable.
20,000,000 listeners heard the episode, the BBC switchboard was jammed and, overnight, Phil Archer became a national hero.

* He was born in Leamington Spa, Warwickshire, his father was a railway signalman and his mother the daughter of a coalminer.

* He left school at 15 to work in a library. Two years later he was called up for National Service, failed his medical test and enrolled at Birmingham University to read English.

* He worked his way through College by registering as a fire-watcher for which he got 4 old shillings and 6 old pence, his supper and a bed for the night in the warden's shelter.

* From Birmingham, where he got a first-class honours degree, he went on to Christ Church, Oxford, with a research scholarship and immediately joined the University Dramatic Society.

* In 1950 he toured the U.S. in a student production of King Lear, which starred Peter Parker, later Chairman of British Rail, as Lear, and Shirley Catlin, the future politician Shirley Williams, as Cordelia.

* After a spell as tutor in 'Anglo-Saxon' at Exeter College, he joined the BBC's 'Light Programme', wrote scripts, produced and acted until, early in 1950, it was suggested that, with his academic background, he might collate the agricultural facts for a new radio programme to be called 'The Archers of Wimberton Farm'.

* He once told a friend that he was a "reluctant Archer" , until he realised what a national treasure the programme had become.

• In later life he lived alone in a converted Warwickshire barn, full of music and books and was the patron of many local charities.

* He was appointed OBE in 1976 and in 1988 he was awarded an 'honorary degree' by Birmingham University.

* He made a final Archers recording last week :