T.S.Eliot, Britain's 'Favourite Poet 'and the dilemmas of old men 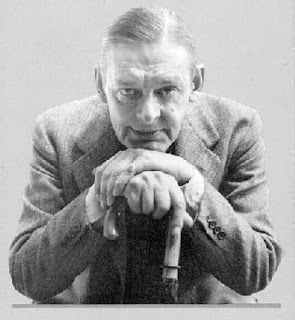 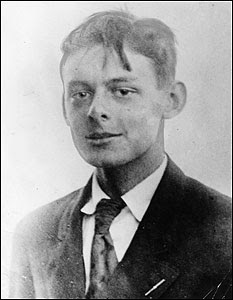 Today, the B.B.C. announced the result of their on-line poll to find the Nation's Favourite Poet and the answer is : the American poet, T.S.Eliot.

This seems entirely appropriate to this blog, since, in one of his best known poems , 'The Love Song of J. Alfred Prufrock', a middle-aged man contemplates the onset of old age.

Eliot wrote the poem in 1909 at the age of 21, ( the young man in the second photo), while a graduate student at Harvard in the U.S.A. He revised it over the next few years and eventually published it in 1915 and at the time he signed his name as 'T. Stearns Eliot'. By this time he had settled in England and later adopted British citizenship.
The first photo shows the middle-aged Eliot - the man in the poem.

It is in these verses that he deals with the dilemmas of age :

And indeed there will be time
To wonder, "Do I dare?" and, "Do I dare?"
Time to turn back and descend the stair,
With a bald spot in the middle of my hair--
(They will say: 'How his hair is growing thin!")
My morning coat, my collar mounting firmly to the chin,
My necktie rich and modest, but asserted by a simple pin--
(They will say: "But how his arms and legs are thin!")
Do I dare
Disturb the universe?
In a minute there is time
For decisions and revisions which a minute will reverse

Shall I part my hair behind? Do I dare to eat a peach?
I shall wear white flannel trousers, and walk upon the beach.
I have heard the mermaids singing, each to each.

I do not think that they will sing to me

He was not best reading his own poetry, as the link below shows :

The second reading by a British stage actor is far better :