Britain is a place for old urban squirrels

Last year the problem of squirrels raiding the bird feeder for nuts and fat, had been resolved by greasing the pole of the feeder, so that, as they shied up the pole they could get no grip.
I must say, I did enjoy watching the first one leap, grip and fall off and they are quick learners. 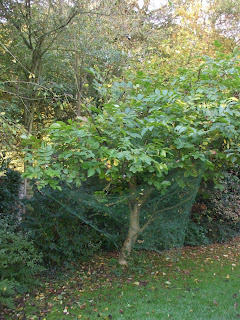 Then there was the problem of squirrels raiding the walnut tree and eating the young nuts. I bought and installed a deterrent which gave out a ultra high pitced frequencey, which we can't hear, but they can and don't like. It was activated by a movement sensor and was absolutely useless. Didn't work at all.

That's when I resorted to good old fashioned netting. 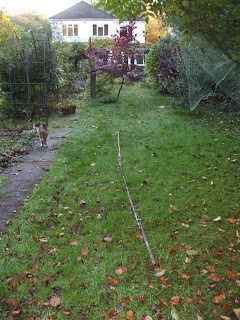 It was when I still saw them up in the tree, I constructed my 'squirrel beater' - 3 bamboo canes, taped together to give height and at the first sign of an intruder me running up the garden to beat them off the nuts. I might add that I never made contact.

I felt a bit like Betsey Trotwood, the Aunt of David Copperfield in the Dickens novel, attacking the donkeys :

'The one great outrage of her life, demanding to be constantly avenged, was the passage of a donkey over that immaculate spot. In whatever occupation she was engaged, however interesting to her the conversation in which she was taking part, a donkey turned the current of her ideas in a moment, and she was upon him straight. Jugs of water, and watering-pots, were kept in secret places ready to be discharged on the offending boys; sticks were laid in ambush behind the door; sallies were made at all hours; and incessant war prevailed'.
Posted by ...............................JohnBoy at 07:58