'Dennis the Menace' is alive and well in New Zealand 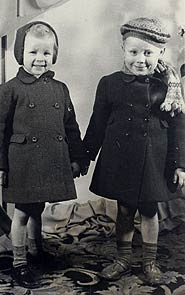 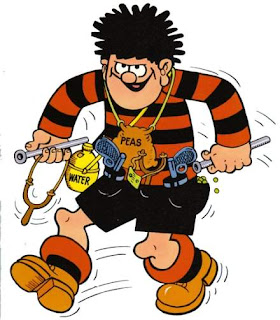 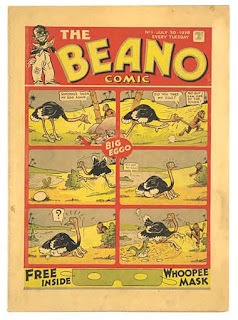 Like me, many old Brits remember the Beano childrens' comic, from the 1950's.

The comic first appeared on 26 July 1938 and was published weekly. During the Second World War, 'The Beano' and 'The Dandy' were published on alternating weeks due to paper and ink rationing.

In September 2009, the Beano's 3500th issue was published. The comic holds the record for being the world's longest running weekly comic.


Its iconic characters such as 'Dennis the Menace', 'Minnie the Minx', and 'The Bash Street Kids' have become known to generations of British children.

By far the most well known character in the Beano Comic is 'Dennis the Menace' along with his dog, 'Gnasher'. He first appeared in March 1951 and since then has made his way from, half a page in black and white, to the front cover of the Beano in full colour.

With his spiky hair and striped jumper, he has been scaring girls with spiders and dropping water bombs on teachers for more than 50 years.

Now the real life inspiration for Dennis the Menace has been revealed : He is Robert Fair, a former Merchant Navy officer from Dundee, who runs a garage in New Zealand.
Fair’s father was friendly with Davey Law, who created the character for 'The Beano' and was a frequent visitor to the Law home as a child. It is the 'angelic' Robert in the black and white photo at the top of this post.

Robert emigrated from Britain to New Zealand 38 years ago and was unaware, until recently, that the character was based on him. His family were never told by Law, who died in 1971, because he feared upsetting them.

The connection was revealed by Law’s daughter, Rosemary Moffat, herself the inspiration for 'Beryl the Peril', another character from The Beano stable.

Fair, now a grandfather of six, said he was delighted with the news. “The description of Dennis the Menace does sound like me when I was young. I was always getting into trouble and I got a few slaps from my father and the belt at school lots of times.”

The 62-year-old mechanic recalled how he perched books on top of doors at Law’s home so they would fall on the heads of the adults.

He was nearly expelled from primary school, after he stuck hot tar on the head of a girl who had been teasing him.
“I’ve always liked playing jokes on people and I have never lost that. I remember reading Dennis the Menace as a boy and all these years I have never known that was me, that was my character. I think it’s fantastic, a real honour.”

Moffat said Fair’s energy and sense of mischief gave her father the idea for the first Dennis the Menace strip in 1951. She recalled how the four-year-old boy would test his parents’ patience by making loud screaming noises and damaging household property. He would also terrify his childhood friends by jumping out on them and throwing spiders and worms at them.

“Robert was a little brat when he was a boy and my father based Dennis’s energy, movement and sense of mischief on him when he was doing his drawings. He used to come to visit us and I used to hate it, as he was always so wild. Every time he left the house my father used to start laughing and say 'What a menace he is' ".