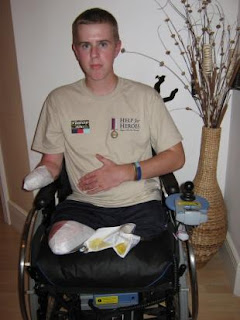 Matthew Weston is a soldier in 33 Engineer Regiment of the British Army. He is 20 years old and one of the most seriously injured soldiers to survive the fighting in Afghanistan since 2001.

Matthew, who joined the Army at 17, was part way through his first tour of duty clearing mines ahead of an infantry patrol in the Sangin region, when he lost both legs and his right arm to a Taliban bomb. He also suffered horrendous internal injuries.

After losing seven pints of blood in the blast, Matthew was returned to Camp Bastion in Afghanistan’s Helmand Province, where he underwent emergency surgery. He was then flown to Birmingham.

He was being treated at Birmingham’s Selly Oak Hospital when he said to his mother and girlfriend : "I liked to get out of the ward to get fresh air".

In his own words, when being pushed in a wheelchair : "I was coming back from having lunch when a bloke and his fat girlfriend started shouting: “Haven’t you forgotten something? Oh yeah, your legs.”"

A few weeks later when Matthew was in a fish and chip shop he was told by a man : "If you don’t want to be blown up, don’t go to war."His mother said : "To taunt anyone in a wheelchair in the way that Matthew was abused is a terrible thing to do, but to do it to a soldier is disgusting".

‘I didn’t know what to do when they shouted the legs insult. I choked back the tears before pushing Matthew away and could hear them laughing. I was mortified. The most heartbreaking thing was when he turned to me and said: “I guess, I’d better get used to it.” ’