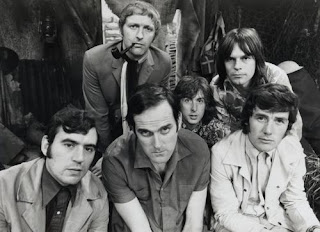 "I'll give you 13 shows, but that's all," said the BBC's 'Head of Light Entertainment' in 1969, and 'Monty Python's Flying Circus' was broadcast for the first time in October that year. In the subsequent 45 shows, the rules of television comedy were rewritten as John Cleese ( 70 ), Graham Chapman ( deceased ), Michael Palin ( 66), Terry Jones ( 67), Eric Idle (66) and Terry Gilliam (69) created lunatic characters and sketches.

My visual and auditory memories bring back the music, speech and images of 'The Lumberjack Song', the 'Spanish Inquisition' and the 'Dead Parrot'. It also recalls Terry Gilliam's surreal and frequently disturbing animations which gave the show its unique appearance.

Cinema films came next, but a tiny budget almost scuppered 'The Holy Grail'. It allowed no money for horses, but it inspired coconut-playing, hoof-sounding squires.

'The Life of Brian' gave us a singing crucifixion scene and 'Always look on the bright side of life'. We had never seen anything like it. 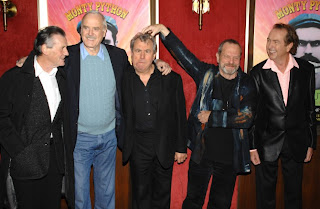 And so it was that, the 5 surviving members of 'Monty Python' reunited briefly in New York last night, using the occasion to poke fun at each other, Germans, Bafta - which gave them an award from 3,000 miles away in London and above all the one person who wasn't there, Graham Chapman. He died in 1989, on the eve of the 20th anniversary of the TV debut of 'Flying Circus'. He was represented at the award, which marked the occasion of the 40th anniversary celebration of the show, as a cardboard cut-out dressed in military uniform as 'The Colonel'.

In a question and answer session after a showing of the new Python documentary, 'Almost the Truth – The Lawyer's Cut', John Cleese was asked how much creative input had come from Chapman, his writing partner. Cleese replied that there were two types of day : "days when I did 80% of the work, and days when Graham did 5%of the work".

At which point Michael Palin interjected: "He's dead now, you can say things like that."

The Pythons recalled being taken during their first tour of Germany to the Dachau Concentration Camp, only to find it closed. Terry Jones recounted how Chapman had said: "Tell them we're Jewish."

"It worked, they let us in," Jones said.

At the end of the evening the Pythons received a 'Bafta Special Award', in honour of their outstanding contribution to film and television and I say "thank you and well done Old Boys".

Always Look on the Bright Side of Life :