Britain's Google is a healthy place for the brains of silver surfers so say Gary Small and Teena Moody from the U.S.A. 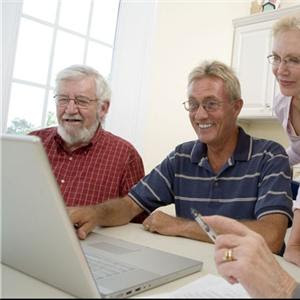 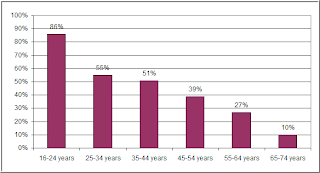 Evidence from studies about 'the online activities of the elderly', suggest that they do much the same online as most other age groups – that is, communication and information searches as well as using online services.

A British study in 2007 found that the information searches were often related to hobbies and interests (68%), travel and holidays (50%) and health or medical (28%).

'Wired seniors' are often as enthusiastic as younger users in the major activities that define online life such as, email and the use of search engines to answer specific questions . In other words, we should not stereotype all older adults as technophobes.

In Britain, for example, around 700,000 people suffer from dementia, a condition in which so much of the brain has died that function is severely impaired and now a new study has found that Web use can help elderly surfers slow or even reverse the onset of dementia by boosting the brain activity. 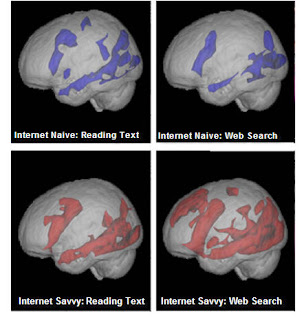 Using brain scans, they found that using the internet stimulated the mind more strongly than reading, and the effects continued long after an internet session had ended.
"We found that, for older people with minimal experience, performing internet searches for even a relatively short period of time can change brain activity patterns and enhance function,” said Gary Small, Professor of Neuroscience and Human Behaviour at University of California.

In the research, Small and his colleagues worked with 24 men and women aged between 55 and 78. Half of them had used the internet a lot, the others had little experience.

At the start of the research, they were asked to conduct a series of internet searches while their brains were scanned using a technique known as functional magnetic resonance imaging (fMRI). This measures changes in blood flow around the brain, to work out which parts are the 'most' and 'least' active.

After the initial scan, participants went home and used the internet to carry out specified tasks for an hour a day, at least seven times over the following fortnight. Then they had a second brain scan, again while searching the internet.

By the time of the second scan, however, the activated areas had spread to include the 'frontal gyrus' and 'inferior frontal gyrus', areas known to be important in working memory and decision-making. The researchers suggest internet searching stimulates brain cells and pathways, making them more active.

“Searching online may be a simple form of brain exercise that might be employed to enhance cognition in older adults,” said Teena Moody, a UCLA researcher who co-wrote the report with Small. Moody believes internet searching challenges the brain more than reading because people need to perform several tasks at once. These include holding important information in their own memory while simultaneously assessing the information on screen and extracting the parts they want from graphics and words.

Small and Moody’s argument is that brains are similar to muscles, in that the more they are exercised, the healthier they become. So, activities such as internet use, reading and socialising can slow or reverse normal age-related declines.