Last of the Summer Wine but not bought at Tescos 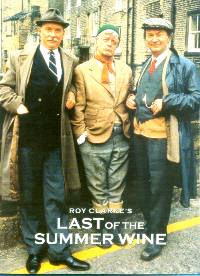 Last of the Summer Wine is a British sitcom written by Roy Clarke that is broadcast on BBC One. It started in 1973 and on the 26 June 2009 the BBC announced that it had recommissioned the show for its 31st series. It is also seen in more than twenty-five countries and is the longest-running sitcom in the world.

Last of the Summer Wine is set and filmed in and around Holmfirth, West Yorkshire, England and centres around a trio of old men whose line-up has changed over the years. The original trio consisted of Bill Owen as the scruffy and child-like Compo, Peter Sallis as deep-thinking, meek Clegg and Michael Bates as authoritarian and snobbish Blamire. The men never seem to grow up and develop a unique perspective on their equally eccentric fellow villagers through their youthful stunts.

'Last of the Summer Wine' continues to garner a large audience for the BBC and has been praised for its positive portrayal of older people and family-friendly humour. Many members of the British Royal Family enjoy the show.

The series was filmed in the beautiful West Yorkhire village of Holmfirth and it seems entirely appropriate that plans to build a 6,200 square-metre Tesco about two miles from the town centre have been axed.