Conservative Britain is no place for tommow's old men 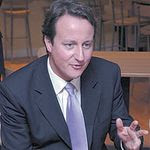 Last Saturday, I published a posting asking the question : ' Will Britain under Conservatives be a better place for some old men ?'
I looked at the Conservative proposal which, if implemented, will stop old people being forced into selling their homes to pay for residential care.

'So British Old Men and Women, YOU ARE ON THE POLITICAL AGENDA. Would it be too cynical to suggest that both The Labour and Conservative Parties want and need your vote because, if anyone is going to vote in the next election it is going to be you'.

Today is Tuesday, and the Conservatives just have announced a proposal which, if implemented, will mean that, at the earliest in 2016, the retirement age for men to draw their State Pension will be raised from 65 to 66 and from 60 to 63 for women. This will affect those who at present are 58 years old and will, apparently save save £13,000.000,000 and go some way to easing the Public Debt, which stands at £80,000,000,000. It will also raise more money in taxes, as people work are forced to work longer.

On the B.B.C. 'Today' programme this morning, David Cameron, the Conservative Party Leader said that a previous agreement to raise the state pension age in 2026 was "not ambitious enough". He added that, an Independent Committee headed by a "strong independent figure," would examine the Tories' pension proposals. He was "desperate" to restore the link between state pensions and earnings and wanted to see a "proper glide path" to bring together the pensionable ages of men and women. He admitted that : "there are not any popular ways to get public spending under control".(My 'bold' emphases)

After the interview, which is on the link below, The B.B.C's Political Editor, Nick Robinson made the point that, those voters who will be affected by these changes are hardly likely to vote Conservative at the next election.

So Tomorrow's future old men and women, YOU ARE DEFINITELY ON THE POLITICAL AGENDA.

The Daily Mirror : 'Tories plan to claw back money by hitting pensions' and an article by Bob Roberts entitled : 'PENSION SNATCHERS'