Will Britain under Conservatives be a better country for some old men ? 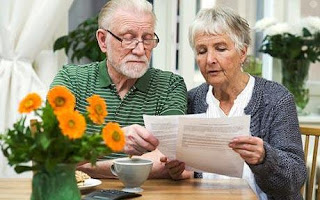 Around 45,000 elderly people a year in Britain are thought to go through the trauma of selling a much-loved home, where they may have lived for decades, to pay for their residential care in old age.

In a move which will steal the thunder of Gordon Brown’s Labour Party pledge to reform social care for the elderly, the Conservatives are set to announce that they would introduce a 'home protection scheme'. This would be a one-off fee of £8,00 which would give the old a guarantee of free care in a residential home, once they were no longer able to look after themselves.

Those participating in the voluntary scheme, which the Conservatives say will be self-funding and have no impact on the public finances, would then be free to bequeath the family home to their children.

George Osborne, the Shadow Chancellor of the Exchequer, said, ( and I emphasise his rhetoric in 'bold type') :
"It's a complete injustice in our society that 45,000 elderly people every year, who have worked hard and saved hard, are forced to sell their home and there's no affordable insurance. It is grossly unfair to those who are neither the richest, who can afford that care, and the poorest who get their care paid for. So we are going to help those people who have done the right thing through their lives and enable them to keep their home and pass it on to their children. This scheme is a genuinely huge step forward for England's care system and will lift a major weight of worry from the shoulders of all older people and their families. In 12 years, Labour have failed to offer older people any hope of a way out of the forced home sales crisis. A vote for the Conservatives is now a vote for a real, affordable alternative to losing your home if you need to enter residential care."

Labels: Conservative plans for the old