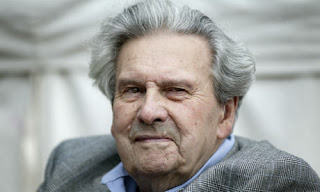 Ludovic Henry Coverley Kennedy, writer, broadcaster, outspoken campaigner and committed atheist, has died at the age of 89 and Great Britain has lost a great Briton. He was an establishment figure who was gloriously anti-establishment.

Born November 1919 in Edinburgh to upper class parents. His great-grandfather was principal of Edinburgh University. Robert Boothby, a Conservative MP and later a peer, was a cousin and friend. He was a dancing partner of the Princesses Elizabeth and Margaret.
He never got on with his overbearing mother, but idealised his father , who, as captain of the former passenger steamer Rawalpindi, had gone down with his ship and 263 men after the attack by the German battle cruiser 'Scharnhorst' in November 1939 He himself had just turned 20.

He was sent to Eton College, where he played in a jazz band with Humphrey Lyttelton. One of his first escapades against authority was to take a small group of
friends by plane to the French resort of Le Touquet and back before the six o'clock roll call.

Next, Christ Church, Oxford, where he was a member of the Bullingdon Club. He described the qualification for membership as being "rich, well-born and addicted to blood sports".

In 1939 War interrupted his studies and saw him follow his father into the navy, serving as a sub-lieutenant on destroyers in the Arctic and North Atlantic. At the end of the war he served as assistant to the Governor of Newfoundland (1943-44). With the War over he returned to Christ Church, Oxford, to read English and to edit the magazine 'Isis'.

After completing his studies he began a career in journalism, working alongside his colleague and friend, the late Sir Robin Day.

It was campaigning work he found most fulfilling.
He once said: "I became committed to revealing hidden truths, and propelled, compelled, by a very heady feeling of excitement."
Kennedy's uncompromising pursuit of miscarriages of justice was rooted in the unfair courts-martial of his father, Captain Edward Kennedy.
He alerted the British public to the fact that innocent people could be convicted and even hanged for crimes they had not committed. 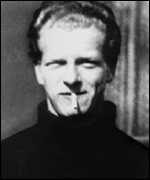 The case of 18 year old, Derek Bentley, hanged in 1952 for murdering a policeman, inflamed him as "unjust and monstrous". The crime was committed by his 16-year-old accomplice, Christopher Craig.

In his book, '10 Rillington Place', he dealt with the erroneous hanging of Timothy Evans for the murder, in 1949, of his infant daughter, a crime committed by an older ex-policeman lodger,John Christie.
This led to a posthumous free pardon by the Home Secretary in 1966. In the film based on his book five years later, Evans was played by John Hurt and Christie, who acted as a prosecution witness, by Richard Attenborough.
Significantly, the case helped to convince many doubters that capital punishment should not play a part in a civilised society. The death penalty was abolished in 1965.

Later campaigns involved the wrongful convictions of the 'Guildford Four', the 'Maguire Seven' and the 'Birmingham Six' for alleged terrorist acts.

His final campaign was in support of voluntary euthanasia, on which platform he stood in the 2001 General Election. His belief in the right to die with dignity was born from watching his mother Rosalind's last, painful months.

Richard Ingrams, co-founder of Private Eye, said that although Kennedy had "a very impeccable establishment background", he was "a bit of an anarchist". "For somebody like that be engaged in the exposure of miscarriages of justice – it gave him an advantage, he couldn't be dismissed as a kind of ,left-wing lunatic, or anything like that."

Michael Mansfield QC said that Kennedy had a need to expose the truth where there had been cover-ups. "He was an eternal supporter of true justice. At a time when no one was questioning the British system, he was there. He opened everyone's eyes. He challenged miscarriages of justice based on confessional evidence and people had to look again at the role these played in the justice system."
"There aren't too many campaigning journalists who are prepared to stand up to the system in the way he did. There is an important need for investigative, courageous journalists and there are fewer people than ever following in Ludovic's shoes. Somebody needs to pick up the baton where he left off." 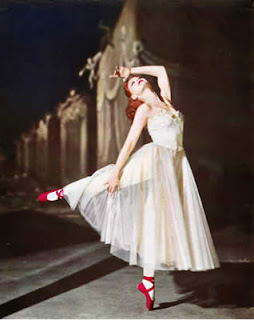 In 1950 he married ballet dancer Moira Shearer and star of the film 'The Red Shoes', who died in 2006. Here is a reminder of her grace and beauty as a dancer :

He unsuccessfully stood for Liberal party in Rochdale byelection in 1958.

Knighted in 1994 for services to politics, broadcasting and journalism.

His autobiography published in 1990, 'On My Way to the Club' contains numerous examples of his self-deprecating humour.
When canvassing in Rochdale, he was invited by an elderly lady to : "tell me all about it".
He enthused about abolition of schedule tax, site value rating and other topics of Liberal policy. When he paused for breath after 10 minutes or so, she looked at him and said: "You are the new vicar, aren't you?"

He resigned from the Lib Dems in 2001 when the former leader Charles Kennedy refused to include the issue of voluntary euthanasia in the party's election manifesto, though he later rejoined. He was lauded by the Lib Dem leader, Nick Clegg, as "one of the great thinkers of his generation. His pursuit of justice and his championing of sometimes unpopular and controversial causes marked him out as a true liberal."