Britain is a country where old men can speak and write 'good' English, whereas young men working at The Department for Education cannot 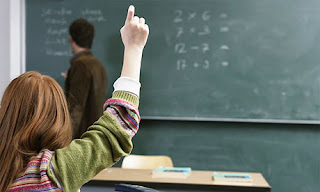 Would-be teachers in England and Wales are required to pass a test in literacy and numeracy and apparently, almost 25% of them cannot do simple sums and a 20% have problems with spelling, grammar and punctuation. The pass mark is set at 60%, so they can get 4 out of 10 things wrong and still pass. In addition, they can have an unlimited number of 'attempts' to pass and one is reported to have taken the tests 27 times before achieving the pass rate.

The 45-minute literacy test is in four parts – spelling, grammar, punctuation and comprehension. 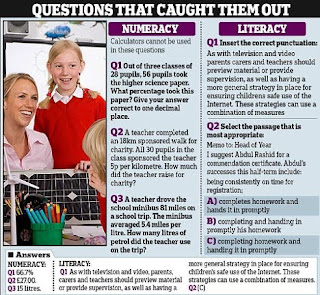 This is how the tests were presented in the 'Daily Mail' newspaper and oh dear, the heading :
QUESTIONS THAT CAUGHT THEM OUT should read :

QUESTIONS WHICH CAUGHT THEM OUT
We might excuse this by saying the grammatical error was made by the journalist and not the Government, however, closer inspection of Q1 and Q2 in the 'LITERACY' test reveal such errors.

Q1 reads : As with television and video parents carers and teachers should preview material or provide supervision.
The word 'either' is missing before the word 'preview'.

Q2 reads : Select the passage that is most appropriate :
The word 'that' should be 'which'.