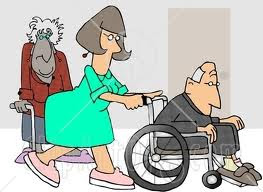 The Daily Mail newspaper is running a campaign called 'Dignity for the Elderly' by asking readers to 'end the scandalous mistreatment of the elderly on NHS wards.'
I shall repeat what the paper cites as facts rather than opinions :

* elderly patients are being crammed into some of the most overcrowded wards in Europe, putting them at risk of infection and neglect.

* pensioners are suffering the indignity of being shunted in and out of beds more often than almost anywhere in the world.

* hundreds of thousands are sent home every year much earlier than is healthy for them.

* the occupancy rate of beds of 83% is far higher than the OECD average of 75% and the 63% in the Netherlands and the former Communist state of Slovakia manages a rate of 67%.

* the shortage of beds has led to shocking neglect, such as elderly people being left in store rooms and mop cupboards and frail patients not being helped to eat their meals because nurses are overstretched.

* last year, 500,000 patients returned to wards after apparently being discharged too early.