Britain is a country whose old men, when young, protested on the streets of London against a War and now their grandsons protest against student debt 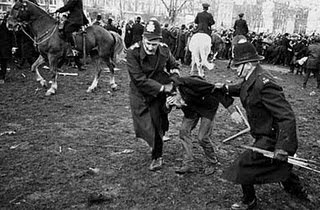 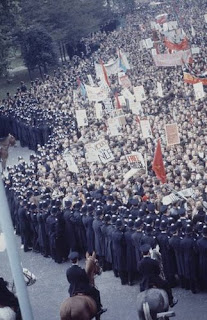 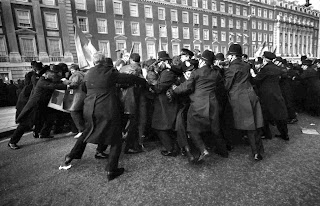 More than 200 people have been arrested after thousands of demonstrators clashed in a protest in London. The St John Ambulance Brigade said it treated 86 people for injuries. Fifty were taken to hospital including up to 25 police officers.

The trouble followed a big rally in Trafalgar Square with an estimated 10,000 demonstrators. The mood at the rally was described as good humoured.

* Violence broke out when the protesters marched to the US embassy in Grosvenor Square which was surrounded by hundreds of police who stood shoulder to shoulder to cordon off the part of the Square closest to the Embassy.

* Tensions rose as the crowd refused to back off and mounted officers rode at the demonstrators.

* Protesters broke through the police ranks onto the lawn of the Embassy, tearing up the plastic fence and uprooting parts of a hedge and during a protracted battle, stones, earth, firecrackers and smoke bombs were thrown.

* One officer was treated for a reported serious spinal injury, another for a neck injury and another had his hat knocked off and was struck continuously on the back of the head with a stick from a banner as he clung, head down, to his horse's neck. 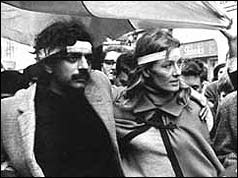 * Earlier the actress Vanessa Redgrave, who had been one of the speakers at the rally, was allowed to enter the Embassy with three supporters to deliver a protest.

* Labour MP Peter Jackson told 'The Times' newspaper : "I was particularly outraged by the violent use of police horses, who charged into the crowd even after they had cleared the street in front of the Embassy."

* Police arrested 153 people during clashes in London on the third day of protests against plans to raise student tuition fees.

* The day ended with a stand-off with police in Trafalgar Square.

* Students are campaigning against plans to raise tuition fees in England to up to £9,000 per year, with a vote expected in the House of Commons before Christmas.