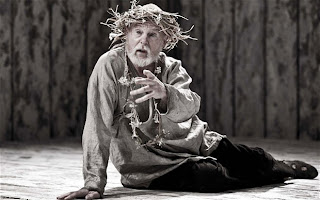 Derek Jacobi’s 'King Lear' has been getting extraordinary reviews from seasoned Shakespeare watchers for the play which is regarded as his greatest tragedy.

Who is this sprightly 72 year old who plays Lear ? Well, apparently he :

* was an only child, born in Leytonstone, London, the son of Daisy Gertrude, a secretary who worked in a drapery store and Alfred George Jacobi, who ran a sweet shop and was a tobacconist.

* was born in 1938 and was a 'Second World War baby' who had a happy childhood and in his teens, went to the County High School where he joined the drama club and starred in a production of Hamlet, which was taken to the Edinburgh Festival Fringe and was well-regarded.

* at 18, won a scholarship to the University of Cambridge, where he read history and on stage played many parts including Hamlet, which was taken on tour in Switzerland where he met Richard Burton.
http://www.youtube.com/watch?v=-elDeJaPWGg

* was, as a result of his performance of Edward II at Cambridge, invited to become a member of the Birmingham Repertory Theatre in 1960.

* had his talent recognised by Laurence Olivier, who invited him to become one of the founding members of the new National Theatre where he played Laertes in Hamlet opposite Peter O'Toole in 1963.

* had his big breakthrough in 1976 when he played the title role in the BBC's series 'I, Claudius' and cemented his reputation with his performance as the stammering, twitching Emperor. He was 38, playing the 51 year old Claudius and I was 29.

* in 1979, took Hamlet on a theatrical world tour through England, Egypt, Greece, Sweden, Australia, Japan and China with himself as the Prince and was invited to perform the role once more at Kronborg Castle, better known as Elsinore Castle.

* in 1986, at 48, made his West End debut in 'Breaking the Code' with the role of Alan Turing which was written with him specifically in mind. The play was taken to Broadway.
http://www.youtube.com/watch?v=gV67Sj2jkVg

* in 1988, alternated in West End the title roles of Shakespeare's Richard II and Richard III in repertoire.

* on tv, played Hitler in 'Inside the Third Reich' in 1982.
http://www.youtube.com/watch?v=hjh0Ukuzc3o
* made his directing debut as Branagh's director for the 1988 Renaissance Theatre Company's touring production of Hamlet.

* has done many things in the last 20 years, come a long way from that state high school in London and now graces the London stage as, possibly, one of the greatest ofk ng Lears.