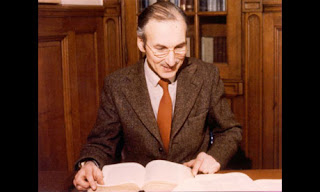 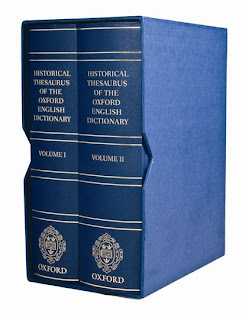 Michael Samuels has died at the age of 90. I had never heard of him, but I know I would have liked him, not the least because we both share a love of the English language.

* was born in London, the son of a lawyer, educated at St Paul's School
and Oxford University where he studied 'Classics' until the outbreak of the Second World War.

* served in the Air Ministry and returned to Oxford in 1945, where he transferred to the study of English.

* got a lectureship in the new department of 'English Language and General Linguistics' at Edinburgh University, where the equally new professor was Angus McIntosh.

* collaborated with McIntosh on 'The Middle English Dialect Survey', which involved many years of painstaking examination of thousands of medieval manuscripts and culminated in the publication of 'A Linguistic Atlas of Late Medieval English.'

* started his biggest project, 'The Thesaurus Project', at a meeting of the Philological Society in 1965 and was motivated by his interest in 'how' and
'why' vocabulary changes.

* had a favourite example of an English word changing meaning in 'silly' which started life in Anglo-Saxon times meaning 'happy' or 'blessed' and gradually changed in meaning from 'innocent, harmless', 'weak' and 'rustic' to our modern meaning of 'foolish'.

* saw that the change in 'silly' meant that other words had to be pulled in to fill the gaps left by discarded meanings.

* saw also that changes in social attitudes were also revealed in that we may regard 'harmless' people as 'pitiable' rather than 'admirable', and 'rustic' people as 'intellectually below par'.

* with his team analysed the meanings of the 600,000 words in the Oxford English Dictionary.

* was always ready to engage with new ideas and became aware of the potential of computers for linguistic research and died 6 days before the launch of the Thesaurus alongside the 'Online Oxford English Dictionary'.

* witnessed the affection in which he was held at the launch of the Thesaurus in 2009, where his speech received a standing ovation.