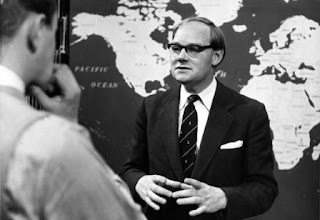 Cliff Michelmore is 91 today and was born exactly 13 months after the end of The First World War in 1919. He was a squadron leader in the Royal Airforce in The Second World War.

He is fixed in the minds of those old men who remember him for those black and white pre- colour days of television and is best known for the BBC television programme 'Tonight', which he presented from 1957 to 1965.

Here he interviews the 17 year old David Bowie who argues the case for long hair :
http://mayomo.com/14167

He also hosted the television coverage of :

the 1966 General Election with Bob Mckenzie and the 'Swingometer':
http://www.youtube.com/watch?v=jfTHdlHlJcg

as well as the 1966 Aberfan disaster and the investiture of Prince Charles as Prince of Wales in 1969.