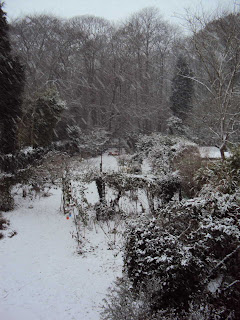 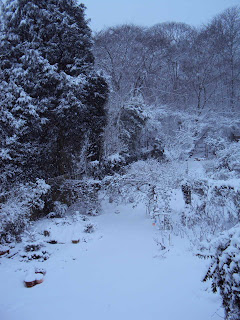 I took these 2 photos of our back garden. The first, as it started to snow and the other about one hour later.


An article in the Guardian newspaper this week was entitled :

UK fears worst winter weather since 1963. Transport secretary calls summit as Met Office predicts return of icy temperatures, further snow and transport disruption but said it was too early to warn of another 1963, despite December's unusual cold, the worst for 30 years.

I was 16 in that winter of 1963, when icebound birds fell out of the sky, the sea froze and the third round of the FA Cup took 66 days to complete. 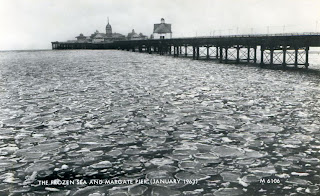 In our winter, Britain's old men,you can rest easy. Your Government has :

* 'warned the public to keep an eye on vulnerable members of communities'.

* through Public Health Minister, Gillian Merron, said :
“Cold weather is especially dangerous for older people or those with serious illnesses. The Government's 'Keep Warm Keep Well' campaign gives important advice to older people on how to stay fit and healthy through the winter. Leaflets were available in local GPs' surgeries, pharmacies or council offices."