Melvyn Bragg, 72 years old next week, author and veteran broadcaster, is currently retelling the stories of life in Britain from 1900 to 1970 in a BBC tv series using archive film collections. From 'coal mining' to 'seaside holidays', Melvyn reflected on the hardships, pleasures and enormous social changes in British life.

He traveled across Britain meeting members of the public who appeared in the historic films featured and brought them face-to-face with themselves and their relatives with the help of a 1967 custom built vintage 'mobile cinema', a converted Bedford van with 30 seats inside, an aisle down the middle, designed to go round the country to show educational films to young working people to demonstrate : 'how the factories they were working in could be improved.'

Melvyn has said that :

* "At the turn of the last century one invention changed the way we recall our history forever – the motion camera. Thanks to Britain's pioneering film-makers, we can still glimpse a world long gone."
http://www.bbc.co.uk/programmes/p00k53hg

* "I read history at Oxford University, putting it rather crudely, I’d never come across anyone like me, i.e. from a working-class background. You only saw the people who made history: the aristocracy, the politicians, the war heroes, the generals. Most of the people like me had just been numbers. Whereas the aristocracy of this country had a history. They had a history in their portraits, and in their family genealogies and they had it in history books."

* "Now, partly because of oral histories and photographs, but I think more dramatically because of film, ordinary Britons see that they have a history too. Film has changed the way we look at the past."

* "One of the great things about making 'Reel History' was meeting British people from all over the class system. It made me realise that London is a different country. When you go out into the country people are a lot nicer, more careful and thoughtful. I sometimes think the only true record of England is the Cumberland News.”

'Meeting the Lambeth boys 52 years on' is an excellent example of Melvyn taking old London boys back to the time when they were cocky young men in 1959 when Karl Reisz filmed them.
http://www.bbc.co.uk/programmes/p00k1y2t 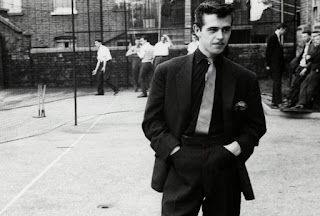 Labels: Melvyn Bragg and the Reel History of Britain