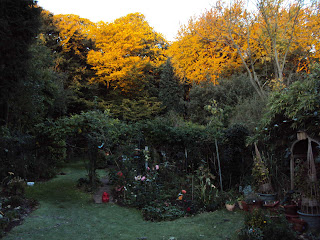 I took this photo of the chestnut trees at the bottom of our garden their colour pressages the onset of what we Brits call 'autumn' and American call 'the fall'.
Who is correct ?
To answer the question we must go back to the roots of our practical, flexible and beautiful English language :

* originally the English word 'harvest' meant that 'autumn had arrived' and linguists have traced it back 8000 years to an Indo-European root, 'karp' meaning, 'to pluck or gather'

* by the time of Shakespeare, 'harvest' began to be associated with 'gathering crops' rather than 'the season' and many English people preferred to use the old German word 'fall' with its association with the leaves falling from trees.

* those with a more noble vocabulary might have used the word 'autompne' which arrived with the Normans in 1066 and is derived from the Latin, 'autumnus' which the Romans probably took from the Etruscans before them.

* when the English colonists settled in Virginia in the early 1600s, both words were in use, but over time 'autumn' became the favoured word in England while the American settlers adopted 'fall'.

P.S. I use the word 'fall' to help me remember whether the clocks go back or forward an hour in Britain in the spring and autumn by the simple expedient that : We spring forward and fall back.

Season of mists and mellow fruitfulness,
Close bosom-friend of the maturing sun;
Conspiring with him how to load and bless
With fruit the vines that round the thatch-eves run;
To bend with apples the moss'd cottage-trees,
And fill all fruit with ripeness to the core;
To swell the gourd, and plump the hazel shells
With a sweet kernel; to set budding more,
And still more, later flowers for the bees,
Until they think warm days will never cease,
For Summer has o'er-brimm'd their clammy cells.

Who hath not seen thee oft amid thy store?
Sometimes whoever seeks abroad may find
Thee sitting careless on a granary floor,
Thy hair soft-lifted by the winnowing wind;
Or on a half-reap'd furrow sound asleep,
Drows'd with the fume of poppies, while thy hook
Spares the next swath and all its twined flowers:
And sometimes like a gleaner thou dost keep
Steady thy laden head across a brook;
Or by a cyder-press, with patient look,
Thou watchest the last oozings hours by hours.

Where are the songs of Spring? Ay, where are they?
Think not of them, thou hast thy music too, -
While barred clouds bloom the soft-dying day,
And touch the stubble plains with rosy hue;
Then in a wailful choir the small gnats mourn
Among the river sallows, borne aloft
Or sinking as the light wind lives or dies;
And full-grown lambs loud bleat from hilly bourn;
Hedge-crickets sing; and now with treble soft
The red-breast whistles from a garden-croft;
And gathering swallows twitter in the skies.
http://www.youtube.com/watch?v=NTcdErF9fF8&feature=related 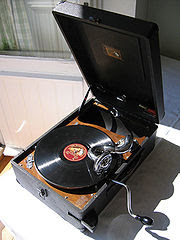