Britain is a country where young , middle aged and old men and women take part in the annual 'Great North Run' 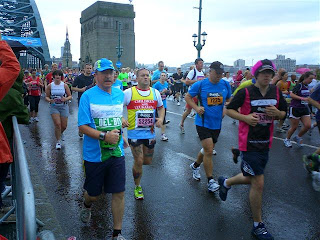 This is my good friend Del Boy taking part in the world's most popular half marathon,'Great North Run' on September 19th and crossing the Tyne Bridge.

He makes the run every year and this year, was sponsored by family and friends to raise money for the 'Alzheimer's Society' charity. He tells me that his running name 'Del-Boy', based on his real name Derek, 'goes down well with the crowds of the Newcastle Geordies' who, 'immediately connect me as coming from the South and call out!' (see the note at the bottom of this page)

In his e-mail to me he pointed out that it:

* is a great British event with fantastic organisation for the large number that take part plus all the spectators and 'camp followers' like H.(his wife)

* it had an emotional note when they play 'Abide With Me' and everyone goes silent as they are there for 'someone' with lots of photos of friends and family members on the back of their running tops or 'something' like the charity for which they are raising money.

Some things you probably didn't know about the Run, that it was :

* devised by former Olympic 10,000m bronze medallist and BBC Sport commentator, Brendan Foster who was inspired after running in the 'Round the Bays Race' in New Zealand in 1979.

It is :
* one of the biggest running events in the world and the biggest in the UK with only the 'London Marathon' coming close to attracting similar numbers of runners. 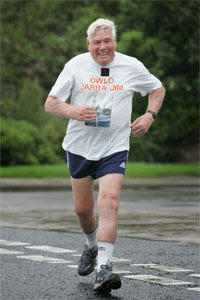 * and had Jim Purcell or 'Jarra Jim', who at 89, was one of the oldest participants aiming to complete his 24th consecutive run, who only started running at the age of 65 and over the years has raised thousands of pounds for charity, taking part in marathons and running events all over the British Isles.

Note :
To understand the significance of the name,'Del Boy', see my posting for Sunday, 12 September entitled : 'Britain is a country of old men who remember 'Only Fools and Horses with affection'.