If Britain is no country for old men, neither is Japan 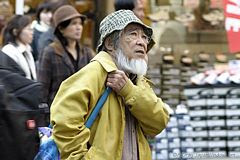 Apparently, like the results of a mysterious plague, the oldest of the old in Japan are suddenly and rapidly 'disappearing'. The reason, however, is not disease, but oversight and inadequacy in social welfare which has created an unexpected social issue.

The problem started near the end of July this year when local government authorities went to congratulate a Tokyo resident on his 111th birthday because, according to records, he was supposed to be the oldest man alive in the city. However, after his family suspiciously turned the officials away, police were brought in to investigate. The old man was not found in his home, but his mummified corpse was and he had reportedly been dead for 30 years.
It was reported that his family had received over $100,000 worth of widower’s pension in his name after his wife died six years ago.

In the wake of that situation, officials started to investigate other centenarians and by August the whereabouts of more than 30 centenarians had now been brought into question.
This is not a new problem. In 2005 there were 52 cases of people over the age of 100, who were thought to be alive and were found to be either dead or missing.

The Japan has one of the highest life expectancies in the world and in 2009 there were believed to be 40,000+ individuals over the age of 100 and the welfare of the old has become a problem as resources to track their well being are limited.

Having said that, the Japanese take strong pride in their longevity, have a national holiday celebrating the elderly.