Britain is a country where old men now have their very own celebration on 'Older People's Day'. 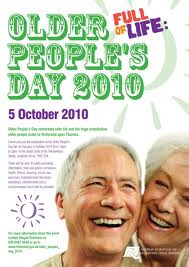 
Apparently, 'UK Older People’s Day helps celebrates the achievements and contributions of older people to society, with this year’s celebration based around the theme of ‘Getting and staying active’, encouraging people to prepare well in the present to enjoy a positive and active life later on'.

A bit of research revealed a few flurries of activity in some regions :

* Greenwich celebrates the achievements and contributions of older ...

If we had dropped in on Greenwich, what would we have found ? :

* An 'Age Concern event' where admission was free and included light refreshments and as well as an opportunity to talk to a healthy living team about 'fun ways to stay active', a 'host of other activities' on the day which included :

Well, that sounded a lot of fun and practical too, with the 'blood pressure checks', presumably coming after the 'dance' and exercise and all this was at the 'Greenwich Pensioner's Forum'.

Over at Charlton House there was another activity which cost £1 and had the Mayor in attendance. Here the activities included :

They all sounded jolly exciting and the £1 entrance fee to the event included tea, coffee and lunch and entry to a raffle competition. The Council Cabinet Member for 'Health, Adults and Older People’s Services', said:

" I hope as many people as possible make it along to the events and a great time is had by all."

I bet a lot of old men had trouble deciding which events they should attend : on the one hand would it be dance - exercise - music - blood pressure check - massage - fruit smoothies or, on the other, talk - poetry performance - talk - male voice choir - Scottish dancing. What would I have chosen had I lived in Greenwich ?

Outside London, over in Cheshire they had free smoke alarms - taster sessions for flower-arranging - 'men in sheds' - belly-dancing - walking groups - information about home repairs, adaptations and improvements.

The 'belly dancing' sounded a bit more interesting than the 'home repairs'.

The 'Men in Sheds Project' was more serious and aimed to encourage older men : 'to go along for some 'shed therapy' whether they are lonely, want to chat over a cup of tea, learn new skills or share the skills they have with others or just get out of the house for a while'. I'm still not sure if 'shed' meant that they sat in a 'garden shed' or 'shed', as in 'got rid of' their worries. Maybe it was a bit of both.