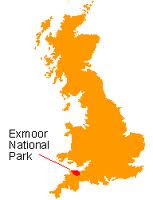 The magnificent 12 year old, 300lb stag which stood 8 feet high and was known as 'The Emperor of Exmoor', was shot dead by a mystery stalker in the cold, misty dawn of a moorland valley on October 8th.
Here the killer sits alongside the dead stag clutching an antler, possibly to position the head after ‘sticking’ the animal – slitting its throat – to drain the blood and preserve the quality of the meat. 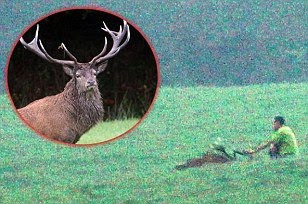 The photo was taken moments after the stag broke cover from woods, which had long been his haven and where deer shooting is banned and is thought to have run straight into the sights of the hunter.
http://www.3news.co.nz/Emperor-of-Exmoor-Giant-stag-killed-in-Britain/tabid/313/articleID/183262/Default.aspx
Newspaper coverage has ensured the Emperor's immortality :
The Guardian :
Dead or alive? The Emperor becomes an Exmoor legend. 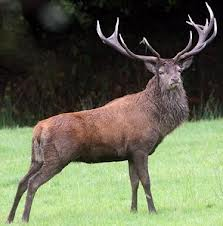 http://www.guardian.co.uk/media/2010/oct/31/emperor-stag-exmoor-killed-sightings
The Independent :
Michael McCarthy: With the death of the Emperor we mourn the passing of an ideal.
http://www.independent.co.uk/opinion/commentators/michael-mccarthy-with-the-death-of-the-emperor-we-mourn-the-passing-of-an-ideal-2120531.html
The Daily Mail :
Is this Emperor? Tantalising picture that suggests the great stag of Exmoor might not have been shot dead after all.
http://www.dailymail.co.uk/news/article-1325014/Emperor-Exmoor-stag-spotted-Tantalising-picture-suggests-hes-alive.html