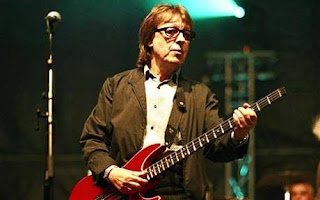 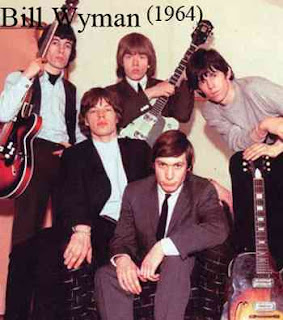 
Things you probably did know about Bill, that he :

* Since 1997, has recorded and toured with his own band, 'Bill Wyman's Rhythm Kings.'

And things you probably didn't, that he :

* was born in Lewisham Hospital, South London (as indeed I was 13 years later)

* was the son of a bricklayer and one of five children.

* spent most of his early life in a terraced house in one of the roughest streets in Sydenham, London and has described his childhood as "scarred by poverty".

* attended Grammar School from 1947 to '53 and left before taking exams after his father insisted that he took a job working in a betting shop.

* took piano lessons from age 10 to 13, then fell in love with the sound of a bass guitar and decided it was his instrument.

* created the first 'fretless electric bass guitar' and played this in a London band called 'The Cliftons' where he used the stage name 'Bill' Wyman, taking the surname of a friend with whom he had done National Service in the Air Force from 1955 to 1957

* heard that a 'rhythm and blues' band called 'The Rolling Stones' needed a bass player, auditioned and was hired in 1962.
http://www.youtube.com/watch?v=4Xp9jcIVvNY&feature=related

* was married and older and remained an outsider in the band.

* kept a journal beginning when he was a child and used it in writing his 1990 autobiography 'Stone Alone' and his 2002 book 'Rolling with the Stones'.

* claims to have composed the riff of 'Jumpin' Jack Flash' with Brian Jones and drummer Charlie Watts.
http://www.youtube.com/watch?v=hxpfBWMOlOk

* says that "(I Can't Get No) Satisfaction" was released as a single only after a 3-2vote within the band with him, Watts and Jones voting 'for', Jagger and Richards 'against', feeling it not sufficiently commercial.
http://www.youtube.com/watch?v=9CqVYPVCR9M

* composed the score of the 1981 Ryan O'Neal-Omar Sharif film 'Green Ice' and made a cameo appearance in the 1987 film 'Eat the Rich'.

* has a love of art and his photographs have hung in galleries around the world.

* is an amateur archaeologist, enjoys relic hunting and has designed and marketed a 'Bill Wyman signature metal detector'.

* Formed his own band 'Bill Whyman and the Rythmn Kings' and following his 70th birthday in 2006, Wyman undertook another British tour.

I put a spell on you :
http://www.youtube.com/watch?v=NMYNfgjL1co