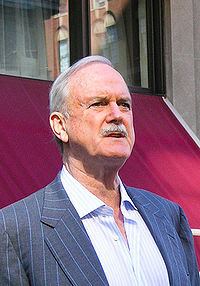 Things you probably did know about John, that he :

* in the late '60s, was part of the 'Monty Python's Flying Circus' tv team and the 4 Monty Python films.
http://www.youtube.com/watch?v=49c-_YOkmMU

My posting on 'The Pythons' on this blog : October 17th 2009 :
http://britainisnocountryforoldmen.blogspot.com/2009/10/britain-is-still-country-for-old-men.html


* in the mid '70s, co-wrote and starred in, with first wife Connie Booth, the tv sitcom 'Fawlty Towers'.
http://www.youtube.com/watch?v=u98W_2a1BmA

* co-starred with Kevin Kline, Jamie Lee Curtis and Michael Palin in the films 'A Fish Called Wanda' and 'Fierce Creatures' and starred as the Head Teacher in 'Clockwise',who, incidentally was based on the Head of the Secondary School in South London which I had attended some years before.
http://www.youtube.com/watch?v=tzZAX6YQM6M&feature=related

My posting on my old school on 1st September 2009 :
http://britainisnocountryforoldmen.blogspot.com/2009/09/britain-in-1965-place-where-schools-had.html

What you probably didn't know about John, that he :

* was born in Somerset, the only child of Muriel, an acrobat, and Reginald, who worked in insurance sales.

* at 13 and over 6 feet tall, went to a public school in Bristol and is said to have defaced the school grounds by painting footsteps to suggest that the school's statue, of Field Marshal Earl Haig, had got down from his plinth and gone to the toilet.

* was a student at Cambridge University, studied Law and joined the Cambridge 'Footlights Revue' where he met his future writing partner Graham Chapman.

* briefly performed in the musical 'Half a Sixpence' in the USA, met future 'Python', Terry Gilliam, as well as, American actress Connie Booth, who he married in 1968.

* wrote sketches with Chapman who would suddenly come out with an idea which elevated the sketch to a different level as in the 'Dead Parrot', where the satire on poor customer service, originally involved a broken car, until Chapman suggested they change it to a 'dead Norwegian Blue parrot'.
http://www.youtube.com/watch?v=4vuW6tQ0218

* in the 'Ministry of Silly Walks' sketch, exploited his height as the crane-legged civil servant performing a grotesquely elaborate walk to his office.
http://www.youtube.com/watch?v=IqhlQfXUk7w

* played the neurotic hotel manager, Basil Fawlty, in 'Fawlty Towers', which he co-wrote with his wife, basing the character on a hotel manager he described as "the most wonderfully rude man I have ever met." He, apparently, threw Eric Idle's briefcase out of the hotel "in case it contained a bomb", complained about Terry Gilliam's "American" table manners and threw a bus timetable at a guest who asked "the time of the next bus to town?"
http://www.youtube.com/watch?v=C8spJd-bMaA

* in 1988, he wrote and starred in 'A Fish Called Wanda',along with Jamie Lee Curtis, Kevin Kline and Michael Palin and was nominated for an Academy Award for his script.
http://www.youtube.com/watch?v=m7mIy97_rlo