Britain is a country which says "Come back Morecambe and Wise", we need your mirth making today

Treasury to demand 40% budget cuts
...told to draw up “doomsday” budget cuts of 40% and slash bureaucracy...produce plans for extreme spending cuts by the end of this month. The...most ministries, is a spending cut of 25% in real terms over four...ringfenced from real-terms cuts. Education and defence will...
Sunday Times Newspaper

Treasury experts expect up to 600,000 jobs to go in the public sector and up to 700,000 in the private sector by 2015. Their dire warning came in a presentation seen by Mr Osborne in the days before the budget.
Daily Mirror Newspaper 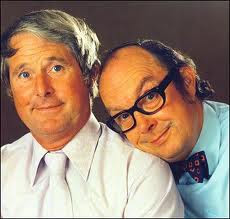 Eric Morecambe and Ernie Wise were a comedy duo who worked together from 1941 till Eric's death at the age of 58 in 1984. Ernie died at the age of 74 in 1999. They may no longer be with us, but they still have the power to make us smile and laugh at their comic genius.